You are here: Home / They Watch / DVD Reviews: Jennifer’s Body 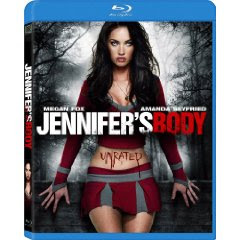 This film I love and I hate so much,.and I then dwell on it and fall in love again. There are qualities that this film possesses that I absolutely love about teen horror flicks. While not scary, this film is fun and crazy, with cheeky dialogue and hot girls. Now I question myself to get all film school on y’all, because I do have a few gripes with the theory implied in this film.

Lets begin this analysis. OK we all have seen this film a few times before. Its been called Carrie, Ginger Snaps, and Audrey Rose. Was this good as the aforementioned films? No and yes. for a film buff yes if you are looking for a good scary movie no. This film’s formula shows the viewer that all sexual young girls (Megan Fox’s Jennifer) are evil. This film exposes parental fears that our teenage daughters are, or could be having sex and enjoying it. The films real lead is Amanda Seyfried, Jennifer’s best friend Needy. She plays the frumpy non-sexual best friend (a.k.a the hero). This dynamic is tired, but it does work. OK, film school analysis is over.

The general plotting is interesting. Satin worshiping Indie rock band comes to town, ignites Station Night Club fire (I Shit you not), and steals a not so virgin to sacrifice to become popular,. The sactaficed “not so virgin” comes back as a boy murdering succubus. General horror and comedy elements play out through the film. While the film is heavily flawed, it has a great pace and is very easy to watch – except for Megan Fox’s acting (but that not what anyone is paying her for). OK, we get it high school girls are evil.

The script is fun and the dialogue is cleve, r but I think it was a bit too clever. I am a big fan of Juno and her work on United States of Tara, but I feel like she missed the mark here. A bit more substance and a little less style could have gone a long way. Some of the dialogue gets away from the effectiveness of the characters.

Now –  time to talk about the “acting.” Megan Fox just clevages her way through any film and should have watched a few movies before taking on this role (you missed some of your cliches). She just walks through the movie being lifeless and busty ,and even before she becomes a demon she acts like a zombie. This was much like her acting in Transformers but here it may or may not be intentional. Either way she fits the bill. I just wanted to be more scared of her. Amanda Seyfried is a good promising actress. I can’t believe that she can just change into so many different roles (try comparing this to her work in Mean Girls). This  is no different, although she may be to old to play her part, she does it well and with conviction. J.K. Simmons is always a welcome face, and his darkly comedic moments as the one armed science teacher are great. I could done with him having more screen time. Adam Brody feels out of place but does a great job as the singer who’s made a pact with Satan..

The Commentary: This is the most intelligent commentary track I have heard in a while. Kusama and Cody are insightful and talk about creative decision that they made while making the film. It is nice and rare to hear a woman’s perspective on horror.

Deleted Scenes: All are just extended versions of scenes that made the final cut of the film. Meh.


Megan Fox is Hot: Clips from the film of Megan Fox acting sensual and showing off her bod. Only one minute long. I think this feature is counterproductive to the films message. I have friends who have watched this over and over.

Gag Reel: Botched lines and such with some clips from the film and other stuff.

The Dead Pool: Feature about the final climatic scene. Every one chats it up and chime in to the making of the scene.

Life after Film School With Diablo Cody: Cody talks about herself and is interviewed. I did not know before being a top screenwriter she was a stripper.

OK, I feel Jennifer’s Body may be a few decades too late – Heathers meets Carrie. But that not to say the this film will one day be a CULT CLASSIC it just may take a bit longer than most for a following to build. I’m sure fans of Heathers will love this campy high school horror/comedy romp but are resiliant to pick it up due to Megan Fox’s cover art. Gore genre fans will sadly live in disappointment with its lack of scares. I had fun but the message might be lost on some people.

is available for purchase on Amazon.com. as well as from DVD dealers nationwide.

Thank you to Twentieth Century Fox Home Entertainment for providing a copy for our review. We were not paid for the content and all opinions are strictly our own.