You are here: Home / They Read / Book Reviews & Giveaway: Among Thieves 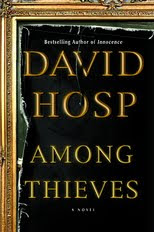 There is the small kleptomaniac in all of us. We pick up a pen from work and shove it in our pocket without a thought, never thinking “I am a thief”.

” gives us a fact: the largest art theft in history took place in 1990 in Boston at the Isabelle Stewart Gardner Museum, with the thieves taking half a billion dollars worth of art.

Irishman Liam Kilbranish has just witnessed the murder of his entire family in Ireland. He carries his grudge 35 years later.

Scott Finn, an attorney in Boston, has some to see a potential client in Nashua Street Jail. Devon Malley used to be in the gangs from Southie, while Finn ran with the Charlestown gangs. Malley has been incarcerated for a theft set up by Vinny Murphy, in the mob.

Detective Paul Stone and his cold as Mr. Everest partner, Elorea Sanchez, are driving to the murder scene at Murphy’s Car Body and Engine Repair. There they find Johnny Bags dead. Clean shot to the head. They also find Vinny Murphy – mutilated almost beyond recognition. The detectives speculate – a mob war? They don’t know. In blood, on the wall, is a message. The Storm.

Scott Finn meets with Tom Kozlowski and Lissa Krantz at a Red Sox game. Tom is an ex-Boston PD, now a private detective. Lissa is Finn’s associate. Finn discusses the case for Malley with them and asks for their help.

Liam Kilbranish and Sean Broadark discuss their killing of Murphy. It had been a mistake. But there are two other men they need to find – and to make them talk. Liam has come to avenge his family’s murders.

As Finn sets forward to help Malley, Malley’s daughter Sally is abducted. The hunt is on. Liam wants the stolen paintings from the 1990 heist – so does Finn. When Malley is murdered, Finn figures out who is the mastermind behind the heist. The man is dying, so Finn strikes a deal. Sally will get the 5 million dollar reward for finding the paintings upon the man’s death.

This novel has an intricate, coiled plot and rumbles and roars with intrigue and convolutions. The character to watch is Attorney Finn. He forgoes the ultimate penalty – death – to make Malley’s death meaningful. Good read, with gangsters, investigators and thieves, if you like a good murder mystery. A little too laborious from this review’s take.

* This giveaway is open to US residents, 18 and over and ends on January 27, 2010 11:59 EST.
* The winner will be randomly chosen and contacted via email.
* The winner has 48 hours to respond to my email or an alternate winner will be chosen.
* Please make sure you check your junk mail folder
* Good Luck