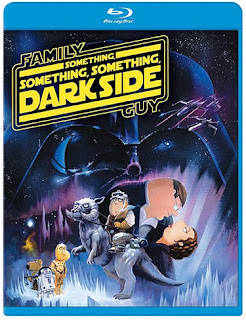 So my last watch did not go so well, and today’s job hunt is discouraging. I signed up for a twitter and created my own blog. I do feel fairly productive. Therefore today marks a new day and a new review. Yes, the Family Guy, as a Rhode Island native I am forced to be a fan. The show is fantastic and I religiously watched the first three season but fell of the train somewhere in the 4th season. I caught an episode from time to time and had seen the Stewie movie. But this marks the first of Family Guy I have seen in HD, and an Empire Strikes Back parody thank you Seth McFarlane.

All of the elements are there and this is even a particularly great retelling of Empire, it leaves very little out of the story. The adding of all the pop-culture references makes this so much fun. I love the Cookie Monster as the Hoth monster( I know I am a nerd for capitalizing Hoth), and the J Crew in Cloud City, but the best of all is the Rocky training sequence with Yoda (I will not spoil this no matter how much I want to).

More than anything this film is a love letter the Star Wars. It is obvious that Seth and Co really love and respect and the series. There is never a point that Family Guy makes fun of the Star Wars.
As with the show Stewie and Peter own it. Stewie thinking that turning someone to the dark side is changing their sexuality. He tries to “turn” Chris but only thinks he can make him go bi but not all the way. Most of the funniest parts I am very apprehensive about posting but it’s just better if it is watched.

The disc has plenty of special features the drunk commentary is great. The track may even be funnier than the film itself, if I had some tequila during this I may have vomited from laughter. There is also a pop up track that gives fun and random insight into Family Guy, Star Wars and just other randomness. There is a fun little feature about the box art and the box art of the original Empire Strikes Back. The table read is great to watch Seth switch between characters on a dime.

Although I do have one major complaint, why is this in Full Frame? I know this is personal but why? Also, where are the Rhode Island references, I love that in the show but where is it in the movie? But that was leveled out when I heard Stewie say F*CK for the first time. You can’t beat a child swearing even if it’s animated. All and all this was a very fun watch and would recommend this to any fan of Family Guy.

is available from Amazon.com for $18.99 or at your local DVD Dealer for about $30.00
Thank you to Twentieth Century Fox Home Entertainment for providing us with a copy for this Blu-Ray Review. We were not compensated for this review. All opinions are strictly our own.
« DVD Reviews: Extract
Look what I got you for New Year’s Eve A…. »