You are here: Home / They Watch / DVD Reviews: Extract 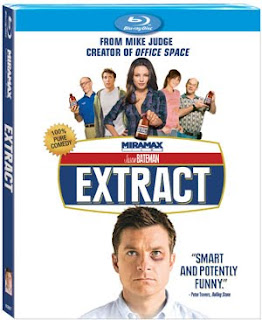 OK. I have been delaying writing the review for over two weeks. I have seen the movie almost three times including all the special features. This would be be the words of a man who loved this movie but however I did not. I watched trying to understand why I detested the film so much. It all came down to an issue of perspective, I could not relate to the main character. Jason Bateman portrays a chemist that owns an extract company one the verge of a sale to a large corporation. I watched wanting to relate to him but I could not find anything but resentment toward him. How can I feel bad for a rich guy with a wonderful wife that he neglects. The comedy in the film is trite and have seen it many times before, race jokes about immigrant employees, and jokes about drug use that lands well intentioned people in to horrible situations, (sorry be Ben Affleck first comedy misfire that I have seen) it just did not work for me.

The films saving grace is an up and coming character actor Clifton Collins Jr. although I have never seen him have a bad performance. He is fully convincing as Shoop a loyal worker who through a freak accident loses a testicle. His perspective is interesting as a man torn suing the company that he loves so much. Also Gene Simmons (of Kiss fame) is fantastic as Shoop’s lawyer. He has some great lines and play a complete insane skeeze ball really well.

I understand what Mike Judge tried to do with this film, recreate Office Space

The film is even underdeveloped in the special feature department. One deleted scene and four extended scenes that were just as bland as the scene before them are left for the viewer. Oh, and there is a making of the viewer where all of the actors talk about how cool it was to work with Mike Judge for 10 or so minutes.

While I did expect great thing from this movie I was sadly disappointed. The films HD quality is great, the picture only has a few blemishes but none seem to be the fault of the transfer. The audio track is as clean as they come.


Bonus Features on this Blu-Ray and the DVD include:

And only on Blu-ray:

Off to watch 10 Things I Hate About You.

is available for purchase from Amazon.com or at DVD dealers nationwide for about $40.00.

Thank you to Miramax Films and Buena Vista Home Entertainment for providing us with a copy for this Blu-Ray Review. We were not compensated for this review. All opinions are strictly our own.