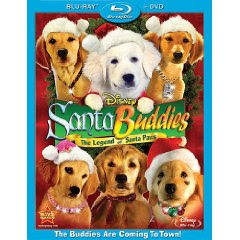 Disney has done it ONCE MORE – here come the Buddies, just in time to save Christmas for us humans! “The overwhelming success of each of our ‘Buddies’ adventures really highlights how irresistible Disney Dog movies are and what great family entertainment can be,” says Bob Chapek, President, Walt Disney Studios Home Entertainment.

It’s the Buddies first Christmas (our favorite golden retriever puppies, Budderball, B-Dawg, Buddha, Mudbud and Rosebud) and the pups – and their town, Fernfield, Washington, have no Christmas spirit. The fake Santa yawns at the kids in his lap, the town Christmas tree won’t light and Krooge, the Dog Catcher is imprisoning every dog he can find just to make money on them. At Santa’s Workshop, in the North Pole, Santa and Santa Paws (his first in command Golden Retriever) and Eli the elf are worried. Puppy Paws, Santa Paws’ son, has voiced out loud to the Magic Crystal (the crystal that holds the entire magic to make Christmas happen) that he doesn’t want Christmas anymore. The crystal melts to the point where almost all of the magic power is evaporating. Eli the Elf decides to take the Magic Bus to Fernfield to pick up Santa’s mail. Puppy Paws hides in the back. Puppy Paws has seen a picture of Budderball on Santa’s Naughty list, and Puppy Paws decides to find Budderball – so that he can be just a puppy for once. So he hides in Eli’s van and arrives in Fernfield, and sets off to find Budderball. Lurking close behind is Officer Krooge. 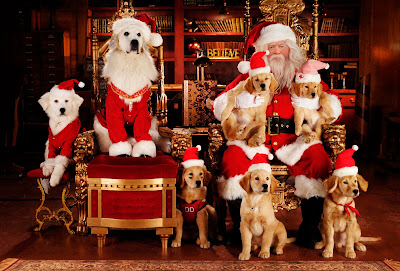 Puppy Paws finds the Buddies, and in short order exasperates each one of them. Suddenly Krooge appears, and Puppy Paws is off to the pound – minus his Magic Collar. There he meets Tiny, a darling puppy who revives his Christmas Spirit.

How the Buddies save Puppy Paws with the help of Eli and Eddie the Jack Russell Elf proves hilarious, full of puppy fun, real lessons, and empathy. The Buddies and Puppy Paws save Christmas and the Magic Crystal grows large as the magic flows back into the Spirit of Christmas. But the reindeer can’t get enough energy back in time to pull Santa’s sleigh on Christmas Eve.

So the Buddies and Puppy Paws make the trip around the world to ensure that all humans – and puppies – have Christmas! A great, cruisin’ Buddies adventure with fun, laughter and the true spirit of Christmas! For the whole family including all puppies!

The best part of the film are the Special Features section at the end! Remember the sing along dots? Well, the Buddies are bouncing on each dot singing “Santa Paws is Coming to Town, “Deck the Halls with Boughs of Holly”, We Wish you a Merry Christmas”, and from Steve Rushton, a video clip singing “Santa Claus is Coming to Town.” Great singalong fun while frames of the movies show on screen, this will take your kids and puppies right into the Magic Crystal arena of Christmas Spirit and Love!

Thank you to Buena Vista Home Entertainment for providing us with a free copy of up for this DVD Review.

is available at Amazon.com for under $20 or at your local DVD/Blu-Ray dealer.