You are here: Home / They Watch / DVD Reviews: UP 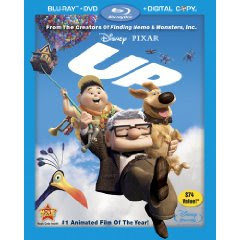 Disney has created an Academy Award winner with UP. Sweet, sad, heart warming, scary and oh so human! What a truly delightful film for all viewers and ages. One of the best movies of the year.

The love story of Carl and Ellie Fredricksen wrenches the heart. Carl, a retired balloon salesman is a true adventurer – but he doesn’t know it. He and Ellie always dreamed of going to Paradise Falls in South America where their house would sit just above the falls. When Ellie dies, Carl, 78, part crank, part curmudgeon, part dreamer and schemer with a heart of gold, attaches balloons filled with helium on his roof and sails to Paradise Falls.

Russell, an 8 year old Wilderness explorer trying to earn his “Help the Elderly” badge, has been under the house and is caught in the adventure when the house starts sailing away. From being terribly annoyed by Russell, Carl finds himself falling in love with the little boy. When they reach South America, they meet Kevin, an incredibly beautiful and exotic rare bird 13 feet tall with the colors of a parrot that can’t fly. Immediately after, they meet Dugs the talking dog. Then they are all discovered by the old man who first set out to find Paradise Falls in his blimp many years ago. The man is pure evil and sets out to capture Kevin, who turns out to be a girl with new babies. The mad scientist has created an island of talking dogs that obey his every ploy to capture Carl, Russell, Dugs and Kevin. Only Dugs is loyal to Carl and party, and he is a courageous and adorable creature.

After many rough attempts, Carl, Dugs, and Russell get Kevin home on the island to her babies and dispose of the nasty scientist. Unbelievably emotional, and poignant, this movie features all the best – plot, characters, animation, JUST EVERYTHING and I loved watching it and doing the movie review.

If you’ve already seen Up, make sure you get the kids a copy for Christmas. A veritable Disney explosion of a film!

5 Disney Fireworks – great job from the director of Monsters, Inc. and the entire Disney crew

Thank you to Disney/Pixar for providing us with a free copy of up for this DVD Review.

at Amazon.com for UNDER $20 or at your local DVD dealer for about $46.