You are here: Home / They Watch / DVD Reviews: Brüno 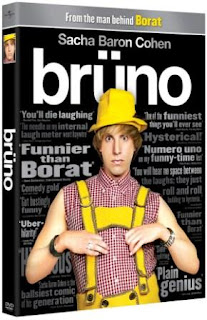 Once again Sacha Baron Cohen is out to offend even the most liberal of us. How can that be possible? Like in his last flick Borat

, his ability to shock, mock and leave us laughing is what he obviously does best.

is the story of an Austrian fashionista who flaunts his sexuality like there is no tomorrow. After being fired in Milan (for ruining a fashion show with his velcro suit), he comes to the U. S. in order to become FAMOUS. In his totally obnoxious style, Bruno sets up unsuspecting people in REAL LIFE interviews and in some of the cases the outcome is HYSTERICAL, while in other’s the joke just falls flat – like when he interviews presidential candidate Ron Paul and gets him into a hotel room to undress and hit on him (Ron Paul mutters the word “queer” as he leaves – which is probably MORE OFFENSIVE than this entire movie).

Still, the reactions of some of the interviewees is priceless. With people such as Paula Abdul, Ron Paul and a man who deprograms gays to make them straight…..there isn’t a boundary that ISN’T crossed. He even tries to have a sit-down between Israeli and Palestinian’s in what turns out to be a confusion on Bruno’s part between hummus and Hamas (all three agree that hummus is delicious). I was amazed at the situations that he puts himself in, as some of them could have been potentially quite dangerous.

Bruno takes a stab at our superficial, fashion world and that knife cuts deeply.

You’ll do a double-take at the end of the movie when you see Bruno singing an anthem with Bono, Elton, Sting, Snoop Dogg and Chris Martin.

Offensive, with full frontal nudity and the most crude remarks that I’ve ever heard, this mockumentary is funny and worth watching just for those moments. The DVD also includes scenes that were not available on the movie when shown in theaters.

Cohen is a master at the art of “in your face” social commentary.

By the way, those who saw this in the theaters will want to buy the DVD or Blu-Ray just for the deleted scenes. Included is that UNBELIEVABLE LaToya Jackson scene as well as a scene with realtors, that will just blow you away.

Thank you to Universal Home Entertainment for providing us with a copy for our DVD review.