You are here: Home / They Watch / DVD Reviews: Ugly Betty:Season 3 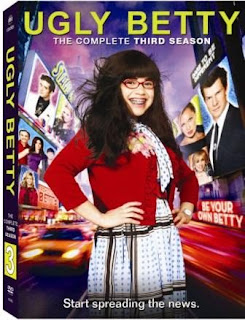 “Ugly Betty” remains one of my favorite characters on ABC.

Betty is on the move and growing and changing – just a little! We wouldn’t want her to change too much. She has her own new apartment. She tries for and gets a place in YETI – Young Editor Training Institute – with a mentor. She roommates with Amanda who has no place to go.

Every adventure is changing Betty and making her grow up. She watches Daniel grow, sees Alexis leave the company, and deals with situations in a more balanced way. Daniel and Wilhemina are now co-owners and have a new CFO – and they have all blended in a mature way that could have never happened last season. And Wilhemina, with Claire as surrogate mom, is having a son and hopes she will be a good mom! The immense popularity of Ugly Betty has always been about decency, a close family, and persistence in what you want. And the show has evolved to allow all characters to grow and change.

Betty and cast amuse us, throw us into despair, have us laughing out loud and being proud of her moments of triumph. Great show, great cast, great season.

• Coming Home to New York City — Ugly Betty moves from sunny Hollywood to chic New York City! There’s energy and excitement in the air as exclusive time-lapse photography records the ground-up recreation of Betty’s sets at legendary Silvercup Studios, and as cast and crews talk about their new adventure. Fans can take part in the show’s first momentous first day in Manhattan, from wardrobe fittings with Patricia Field right up until the director calls “action.”

• Look Who Keeps Popping Up — Besties Michael and Becki host hilarious pop-up video
commentary that runs through an episode.

“Ugly Betty” is based on “Yo Soy Betty La Fea,” the groundbreaking Colombian telenovela that became an international phenomenon, “Ugly Betty” is from ABC Studios.

Thank you to Walt Disney Home Entertainment for providing our review copy of Ugly Betty: Season 3

Ugly Betty fans can purchase the six-disc set of the Complete Third Season from Amazon.com

and other DVD retailers for under $60.