You are here: Home / They Watch / DVD Reviews: The Proposal 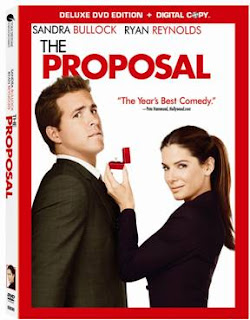 So shoot me. I like Sandra Bullock. I hear a lot of people knocking her, but I like her (and I know that “A” does too – since she told me she does). I’m also a fan of romantic comedies. So, it’s no surprise that when Touchstone Home Entertainment sent me The Proposal (2 Disc DVD + Digital Copy)

to review for The Review Broads that I’d love it. Maybe I’m just THAT predictable.

The Proposal is one of those – gotta get a green card or I’ll be deported, so marry me to help me stay in the country (whew) stories. Only with Bullock’s wonderful timing and Ryan Reynold’s as her secretary who’s been suckered into the deal fake husband to be, it’s a delightful story.

The SHOW STEALER however is Oscar Nunez (you know him as Oscar on “The Office”) as Ramon – the waiter/shopkeeper/stripper/preacher who is so repulsively funny that I almost peed I was laughing so hard.

When the couple leave New York to visit Andy’s (Reynold) parents in Sitka, Alaska – I was BLOWN away by the background in each and every outdoor scene. It was absolutely breathtaking.

My only criticism is that the relationship between Andy and Margaret didn’t actually develop on screen and in the end I was left a little stunned (not spoiling it for those who don’t know the end).
When my hubby saw that I was putting it into the DVD player, he mumbled “chick flick” and walked out of the room. Yes, it’s a Chick Flick (as are most romantic comedies) and this chick (BROAD) loved it.

Bonus Features for The Proposal:

• Set Antics: Outtakes and Other Absurdities From The Proposal — Bloopers and

Thank you to Walt Disney Home Entertainment for providing us with this review copy.

The Proposal is available on DVD as well as Blu-Ray at Amazon.com

and other DVD retailers.