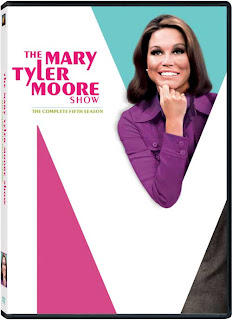 The original vulnerable working girl. For many of you who are younger than I, you grew up watching Ally McBeal, the hard working yet vulnerable lawyer who’s friends and co-workers were always there to support her or throw a wrench into her plans. For MY generation it was
Mary Tyler Moore.

Mary Richards with her clan of co-workers and neighbors/friends was the ORIGINAL series of a woman trying to make it on her own. As I opened the packaging on the Mary Tyler Moore: Season 5 discs, I heard her screaming “RHODA” in the back of my head and lovingly remembered the wonderful characters that made up this cast.

I was not disappointed. Mary’s vulnerability coupled with her strong convictions are as inspirational and FUNNY today as they were in the 70’s. Oh, how I miss Ted Baxter (Ted Knight) as the empty-headed, pretentious news anchor at WSM-TV where Mary is a producer. His sense of timing and his inimitable charm radiate.

For those of you who grew up watching Mary, you’ll immediately feel like an old friend has come “home” to visit. With classic episodes like “Ted Baxter’s Famous Broadcaster’s School” and “Phyllis Whips Inflation” you’ll laugh as hard as you did when you first watched it. If you’re a NEWBIE to this OLDIE – I can assure you that although the wardrobe was made up of leisure suits and ascot ties (HOT in the 70’s) – the story lines and acting are as relevant today as they were back then. My only disappointment is that these were the episodes in which Rhoda (Valerie Harper) had gotten her spin-off and appeared only BRIEFLY on the Mary Tyler Moore Show.

With an all-star cast – including

You can purchase the entire Season 5 of The Mary Tyler Moore Show at Amazon.com