You are here: Home / They Watch / DVD Reviews: Life on Mars 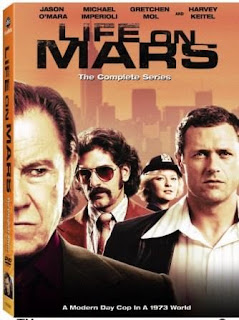 Life on Mars: The Complete Series

I begrudgingly placed Life on Mars in my DVD player only knowing it as the program I turned off after Lost came on. Apparently many others did too due to the shows premature cancellation.

I was aware of the original series but still have not gotten around to watching, so I sit here waiting for another terrible remake and for a moment I actually believe that I had gotten what I had asked for.

It is ridiculous fun, not much of a cop show, not much of a science fiction show (my pet peeve is science fiction without science), but it is good none the less. I have been spoiled by cop shows these past few years. They build season upon season on one case following all the rules, with a real overview of the legal system.

This is a comedy fluff show that falls into all the cliché that cops shows fall into, jumping to conclusions, and jumping from mood to mood (one moment a light comedy the next our protagonist is crying dramatically).

This brings me to the acting, the male lead: Jason O’Mara does a good enough job with the role and he is no better or worse that anyone on Law and Order. Michael Imperioli does what he did in a more limited way, he is just limited to punch lines here, and Harvey Keitel plays a generic badass commander. They all play it well enough to work and it’s just simple fun not classic television.

If you never got the chance to watch it on television, this is a great way to see all of the episodes.

This DVD set contains the Complete Series and includes ~

Life on Mars: The Complete Series

can be purchased on Amazon.com for $27.99 or from your local DVD retailer.