You are here: Home / They Watch / DVD Reviews: Ice Age Dawn of the Dinosaurs 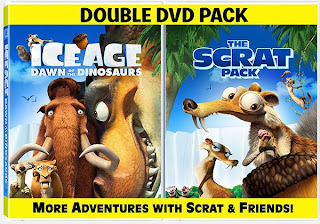 Ice Age: Dawn of the Dinosaurs + The Scrat Pack

Many times when a movie company comes out with a 2nd and 3rd movie based on an original, I don’t expect it to be as good as the original. We try to approach each DVD Review as if we hadn’t seen the previous flicks. But, it makes no difference whether the film is aimed at children or adults – it’s just difficult to re-create the feel that movie #1 brought.

This is NOT the case with the new Ice Age: Dawn of the Dinosaurs.

Once again the characters that made the first two Ice Age movies return along with some new friends. The characters are dynamic, have great personalities and are FUN and a bit “over the top.” Each presents a different message about life, for your child to ponder.

I have to admit that the adventures of Scrat are classic and so much fun to watch. His mannerisms where the high point of this movie for me (just as they were in the previous two). 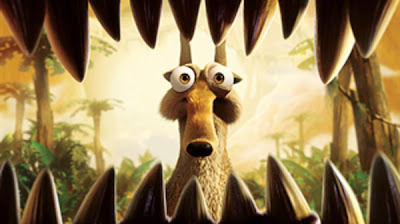 The animation has a 3-D look and feel to it. It’s brilliant textures create some of the best animation that I’ve seen ANYWHERE. From the larger than life weasel, to John Lequizamo’s voice that keeps me laughing, the voice acting in this movie is PRETTY DARNED GOOD.

You’ll find this story to be a bit more violent than the past two, with some jokes thrown in that are aimed specifically at the ADULT audience. That being said, it is still an age appropriate movie.

You can purchase Ice Age: Dawn of the Dinosaurs + The Scrat Pack

from Amazon.com for less than $23. It is also available at your local DVD store for $35.

The Ice Age: Dawn Of The Dinosaurs “Scrat Pack” Double DVD Pack, a great value for moms and fun for kids, will also be available for a limited time only featuring an overload of special features focusing on the determined squirrel including three “Scrat” games exclusive to the disc.

Thank you to 20th Century Fox Home Entertainment for providing the movie for our DVD Review.