Just in time for the Halloween season, Lionsgate has come out with their NEWEST series of Ghost House Underground DVD’s to scare the daylights out of you. Yes, Sam Raimi is at it again, bringing us Four “B” horror movies (which translates into FUN and screams). There’s nothing I like more than doing some off-beat DVD Reviews and these are just that. 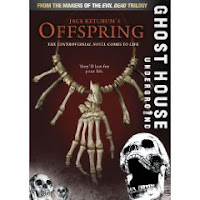 Based on the the sequal to Ketchum’s Off Season, Offspring is a gore-fest you won’t soon forget. Based in a small town in Maine (why do horror movies have to take place in Maine????), you’ll be introduced to some NASTY cannibals of all ages. Yes, there are even children-cannibals ready to dine on a little “local” cuisine. 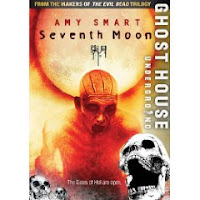 This one comes from the director of The Blair Witch Project, so you KNOW what to expect. hand-held camera shots that make you nauseous…..NOT from being scared, but from getting dizzy. The “Gates of Hell” may be open, but I’d have liked a flashlight, so that I could have looked in. The film is SO DARK, that I had NO IDEA what was going on.

That being said, this is the type of horror that I like. Yes, you’ll be gasping – but it’s from the SUSPENSE!!! I so prefer this style to the slasher/gasher type of flick. Plus, this is not how I’d want to spend MY HONEYMOON, being chased by demons.

If you can get past the fact that the director filmed in the dark with a hand held, the actual story is suspenseful and fun. Definitely a Halloween treat. 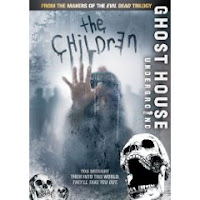 holiday film (Christmas) that makes the H1N1 virus seem like a common cold. Haven’t these families heard of Purel?

When two families vacation together at holiday time, the Kids (wait, THE CHILDREN) get a strange illness that will make for some CREEPY and GROSS happenings. This cheesy, tasteless, flick will have you wondering WHY they don’t make films like this anymore.

This low-budget horror film will take you back about 20 years, when campy B movies were at their height. Definitely a throw back to the good old days of gore. One question, with kids wearing black nail polish NOW, somehow the black nail polish on these Zombie Kids just made me laugh. 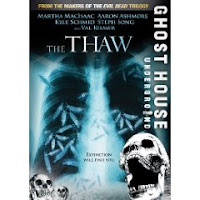 This was definitely the best of the lot. Maybe it was the fact that Val Kilmer had a part in it (although it was a small one) . Overall, the acting was much better than the other 3 in this series.

This is one of those medical/horror flicks, involving a prehistoric parasite (hmmm….the dinosaurs didn’t last, but thaw out a parasite and it just goes to town). Because this is a new film, the effects (like the CGI bugs) are pretty good.

This Chiller/Thriller offers a nice combination of both suspense PLUS gore (yes, there’s something for everyone). Plus with the Global Warming message – it’s something that at least has a social message.

Overall, these are fun “B” movies that you WON’T want your kids watching. Still, there’s nothing like having a Halloween party with flicks like this playing on the screen. Pure fun.

Thank you to Lionsgate Films for providing all four Ghost House Underground films for this DVD Review.