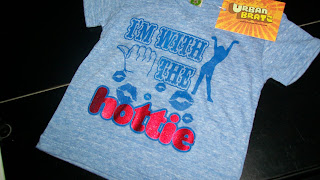 As if there are not enough Big Mouth’s around here at Broad Central, we’re making Baby “E” into a Broad – whoops “Bro”. Auntie Cha-Cha decided that what this family needed was a baby who could hold his own in ANY situation (much like her). So, when The Broads were offered a t-shirt from Urban Bratz to review, she pushed “A” and “Z” down in what appeared to be a one-sided cat fight, grabbed the shirt and proclaimed that she was putting it on “E” and taking him out.

So, what is it about Urban Bratz, that makes them so important to Cha-Cha?

Slogans….in this particular case a slogan on a t-shirt proclaiming “I’m With the Hottie.”

After donning “E” in his newest T, she decided to take a look at the Urban Bratz website to see what OTHER items she could buy for him that would make HER look good. The minute the music started on the site, Cha-Cha was dancing. I tried to tell her that it’s 9:00 am and that Broad Central is NOT a nightclub, but she didn’t care. She and “E” were dancing around the living room and she “ORDERED” a “bottle for the baby.” 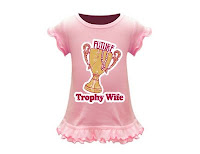 Back to the site, Cha-Cha decided that the “I have a bit of a drinking problem” t-shirt would be appropriate (since the bottle she ordered had quickly been guzzled down by “E”) and she wanted to order the largest size in “Future Trophy Wife” for herself and wear it as a belly shirt (that woman has absolutely NO CLASS).

I have a feeling that these are shirts that will appeal to ANYONE with a sense of humor about their children. Why be satisfied with those plain T’s and onesies, when your kid can be as sarcastic as you are?

Onesies and shirts come in sizes ranging from 3-6 months to 4T and they even have a few in adult sizes that coordinate with your child’s (like “I ROCK” for dad and “I ROLL” for baby).
They are CPSC certified (no junk here) and you can pick up the Urban Bratz line at various boutiques as well as online.

Thank you to Urban Bratz for providing a t-shirt for our review. “E” looks adorable in it.