You are here: Home / Fun / TV Reviews: The Good Wife
Once again The Broads were privée to another new show from the CBS Fall lineup. Join us in our sneak peak at what looks to be the most PROMISING new courtroom drama this year.
The Good Wife
Broad A: Your husband, Peter Florrick (Chris Noth) is a politician, States Attorney for Cooks County. You stand next to him at the press conference. He pounds the podium as he gives his resignation speech after consorting with prostitutes and alleged mismanagement of States’ funds. You notice a speck of thred on his sleeve as you flasback to the lurid and explicit sex tapes released by the DA, wondering which woman left the thread. You are a homemaker with two teenage kids. Your husband is going to jail.

So begins the CBS primetime drama The Good Wife.

Broad Z: Great introduction “A.” I’m a HUGE fan of police and courtroom drama shows and the issues come right from the headlines. This is the first one that I’ve seen that takes a woman’s perspective, and I’m LOVING it. My question – is there a politician out there who hasn’t cheated on his wife? Geez. 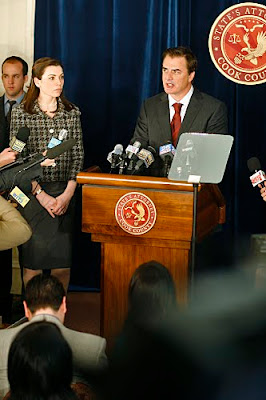 Broad A: Alicia Florrick (Juliane Margulies) must go back to work as a defense attorney 13 years after she was last in court. On her first day at the prestigious law firm who has hired her as a junior associate, she discovers that she must appear in court -in a couple of hours – on a pro-bono murder case. She also discovers that her female mentor in the firm, Diane Lockhart (Chrisine Baranski) makes Glenn Close in “The Devil Wore Prada” seem compassionate. A third shock – the firm has hired not just her but another junior associate just out of Harvard, Cary (Matt Czuchry) for the ONE position that they both want – with only 6 months for one to oust the other.

Broad Z: Nothing like throwing her into the fire after 13 years of not practicing huh? On first appearance it looks like they’re setting her up to fail (like she hasn’t gone through enough CRAP with that jerk of a husband of hers).

Broad A: On the good side, Alicia’s old law school friend Will Gardner (Josh Charles) works at the firm and both encourages her and watches to see how she handles the case.

Broad Z: Yes, thank goodness there’s someone on her side. I’m curious as to how their relationship will develop since he’s her only allie. They seem like an odd match for friends, don’t you think?

Broad A: The accused is Jennifer Lewis, who allegedly murdered her ex-husband because she wants sole custody of their young daughter. She says she is innocent, that she and her ex-husband were carjacked by a man in a red truck, but the parking lot surveillance camera shows nothing on tape that night.

Broad Z: See, they really did set Alicia up for failure. There’s nothing like handing her a losing case. The thing is, you can see that Alicia is DETERMINED to forge forward on this. She’s got something to PROVE.

Broad A: The first trial was a mistrial. The second trial is in Alicia’s hands. As Alicia comforts Jennifer, she allies herself with the firm’s investigator, Kalinda (Archi Panjabi) who she wins over with her compassion for their client and her straightforward honestly about her marriage. 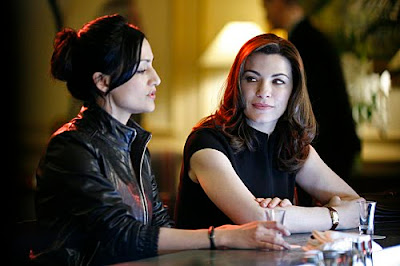 Broad Z: Yes, I’d say that Alicia has more than just a lawyer’s interest in this case, since SHE’S now a single mom (with that gorgeous hunk of no-good husband of hers in jail).

Broad A: Finding herself before a judge who hates her husband, Peter, Alicia and Kalinda decide not to go for another mistrial but to prove the murder was real – only Jennifer isn’t the murderer. This pilot drives the action like a well-oiled BMW – through great detective work, she wins the case, finds the real murderer, gets the job, and proves herself a capable mother and attorney.

Broad Z: And in anyone else’s life – all is well with the world. Unfortunately, Alicia still has that cad rotting in jail that she’s married to – to deal with. Oh and what are all of these other people thinking? They know she’s the scorned wife, you’d think that they’d stand BESIDE her rather than oppose her if they hate her husband. Some people just amaze me.

Broad A: My only question was why she wasn’t in divorce court first – but we are left wondering what will happen as Peter secures a promising appeal.

Broad Z: You know why “A” – it wouldn’t be as exciting if she and Peter were divorced. This will make for some GREAT tension in upcoming episodes. Besides, who cares if he’s a total JERK – we’re talking Chris Noth here. He’s on my top 10 list of HUNKS and I want to see more of him.

Broad A: Wonderful acting, great plot and characters. Another night I will give up to CBS to watch this drama unfold! 5 stars to CBS and the cast of The Good Wife.

Broad Z: You and me both. Oh – I want to look like Julianna Margulies when I grow up.

You’ll be able to catch The Good Wife on Tuesdays at 10:00 PM on CBS beginning September 22.