You are here: Home / Fun / TV Reviews: Accidentally on Purpose

The Broads had the opportunity to get a sneak peak at some hot new shows coming to CBS this Fall and well…you KNOW we have a thing or two to say about them. So, sit back, grab yourself a Mojito and let’s take a look into the newest comedy starring Jenna Elfman.

Broad A: Like “Dharma and Greg,” Jenna Elfman’s character in “Accidentally on Purpose” remains effervescent, quirky and funny. This first episode begins with Billi (Jenna Elfman) and her boss/lover James (Grant Show) on the Eiffel Tower, stars streaming down, lights aglitter. James hands Billi a small package for the third anniversary of when they started dating. Billi, a film critic for James’ newspaper, expects a ring. Instead she receives chocolates – with a pecan in them middle. Billi breaks up with James on the spot.

Broad Z: Well, you know after three years, I’d be expecting a ring too, so you can’t blame her. By the way…is it MY IMAGINATION or does Jenna Elfman look at great as she did when she played Dharma in Dharma & Greg? That girl hasn’t aged a BIT! 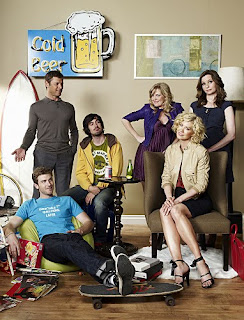 Broad A: Later, at a bar with her girlfriend Olivia (Ashley Jensen) and Abby (Lennon Parham), her married sister, Billi decides to flirt with a twenty-something (she is 37) who turns out to be Zack the chef (Jon Foster).

Broad A: They have a brief fling and five weeks later, Billi is taking a pregnancy test – which turns out positive.

Broad Z: It’s not something you want to hear after a fling with a younger guy. Ha, I get it “Accidentally on Purpose” (whoops think I’ve had too many of those Mojito’s).

Broad A: She decides to keep the baby and tells Zack she is pregnant, and to her surprise, he wants to be there for her, to be a father.

Broad Z: So he’s cute AND a nice guy.

Broad A: One of the funniest scenes is Zack and Billi in the doctor’s office where she has an ultrasound.

Broad Z: Yeah, I got a kick out of that one too.

Broad A: Since Zack lives in a van, Billi tells him to move in with her. But – he has to keep hands off.

Broad Z: That’s gonna be tough, because those too have some REAL CHEMISTRY! OMG, Did you see the MESS he & his friends made at her place? She’s going to have her hands full with him, that’s for SURE. 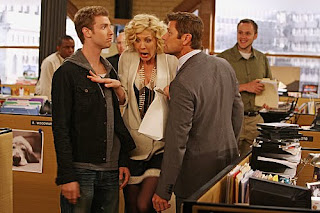 Broad A: James comes to her office cubicle is ready to commit – to living together and moments later Zack arrives with Billi’s lunch. James walks away after discovering that Billi is pregnant with Zack’s child.

Broad Z: Definitely not something someone who wants to spend the rest of his life with you wants to hear. 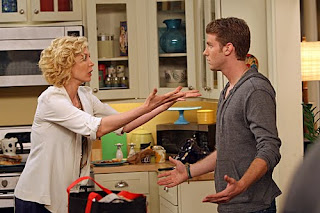 Broad A: Billi and Zack fight and she tells him to move out – until she walks into the extra room and sees the magnificent nursery he has created for the baby.

Broad Z: Of course, he and his friends were kind of mooching off of her, but still he really has a good heart.

Broad A: James out – Zack in. This is a sitcom that relaxes and reminds me of the Dharma and Greg times. Elfman is her usual comic genius and the first episode ends with the baby on the way.

Broad Z: The cast is full of some really good comedic actors who really work off each other well. I’m gonna have to agree with your take, she’s still got great comic timing. The only problem that I had is that Jenna Elfman still looks so young, so to think of her as a Cougar is kind of a stretch for me, but I guess to a kid just out of high school she’d look older (that’s what happens when you’re my age).

Broad A: So, you planning on watching it this Fall?

Broad Z: Hey, just like Billi – I’ll be sitting back with a Mojito and enjoying this show on CBS, Monday, September 21st at 8:30pm.