You are here: Home / Fun / Books / Book Reviews and Giveaways: The Hunted 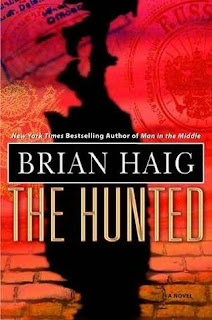 It is easy to review a good book. And, very difficult to review a complex, and absolutely great book! If you only buy one book this year, make it “The Hunted.” It will be worth it!

by Brian Haig takes us into Gorbachev’s Russia and out. The Soviet Union is falling apart. It is 1992, and the insane and brutal Yeltsin is now in power as Russia crumbles from the largest nation to many small unstable states. Communism has overlapped over a new capitalism, and the economy is in a shambles. Behind the rise of Yeltsin is young Alex Konevich, a brilliant financial genius who knows how to utilize the new capitalist methods for making money. Starting in the construction industry, moving to arbitrage, and then banking, Alex makes millions and anonymously finances Yeltsin’s rise to power. As capitalism devours and replaces the communist system, all of the KGB bad guys are routed to the front. Alex and his wife Elena are found out and kidnapped by Sergei Golitsin, the deputy director of the KGB in Budapest. Alex is horribly tortured and agrees to sign away his 400 million, his many companies, and his bank in order to save Elena. He has made a critical mistake, and hired Golitsin as his in house security man because 8 of his executives have been murdered in two days. Golistin double crosses Alex and sends his KGB pals and Russian Mafia friends in for the kill – but Alex and Elena get away to
the U.S.

Next, Golitsin sends a cohort to Berlin to meet with Alex, offering to hire him and give him a small percentage to run his own stolen companies. Alex, now framed as a criminal in Russia, and accused of stealing money from his own bank that now sits in Golitsin’s bulging pockets, refuses. His and Elena’s real troubles begin.

Back in the U.S., as Alex and Elena are settling into their Watergate apartment and starting new lives, the new director of the FBI, John Tromble, makes a devil’s pact with Golitsin and his people. He will place 30 FBI agents in Russia to continue trying to fight the Russian mafia. In exchange, he gets Alex and Elena Konevich, dead or alive. Tromble knows that he is dealing not only with Golitsin and the KGB, but also the Russian mafia, as their head, Nicky, and his partner attorney Tatyana are also partners with Golitsin.

Alex and Elena are arrested by the INS and the FBI on a trumped up expired visa charge. Alex gets Elena out of jail, but he goes from one cesspool federal prison to another The worst federal prisons in the country thanks to Tromble’s manipulations. At each jail, he is incarcerated with the worst of worst criminals as cellmates. Yet he turns the situation around by becoming a financial investor to the inmates, with Elena on the outside performing the financial transactions that succeed beyond belief.

His last prison, the third in twelve months, is Yuma, where he sets himself up with cellmate Bitchy Beatty, an ex pro football player and pedophile, as his protector. But Tromble and Golitsin place a $500,000 kill fee on his head within the prison. After three attempts on his life, Alex and Elena decide to ask their immigration lawyer, MP, to move the case to the federal courts. MP is terrified, as this is a last risk situation, and the Russians have forwarded countless boxes of documents they used to frame Konevich. Also, MP has no knowledge of criminal proceedings, but the three decide it is their only option to keep Alex alive. Alex is dead man walking unless he
gets out of prison. MP decides to call in a favor from a former classmate and asks for the help of one of the largest law firms in Washington, D.C. They agree, on a pro bono basis.

In the meantime, back in Russia, Alex’s private investigator Mikhail has set Tatyana Lukin, Nicky and Golitsin up, and the three end up dead.

The trial itself is worthy of another book. Alex, MP, and Elena, along with the law firm of Pacevich, Knowlton and Rivers (PKR) introduce the tapes that Mikhail has procured, detailing the conversations of Tatyana, Golitsin and Nicky and how they framed Alex, brutalized him, and are now trying to do the same to another Russian entrepreneur. The judge accepts the tapes as evidence and Alex goes free. As a bonus, Tromble is fired and Judge Elton Willis tells Alex
to file a suit against the US government and the FBI for at least 10 million.

When they move to Colorado, Alex is in despair. He only has 2 ½ million left, and he and Elena have to start over completely, Until Elena smiles and tells him that on the tapes Golitsin has given the name and password of the bank where 225 million of Alex’s money is sitting. They transfer the money to their own account and they are finally free.

That this story is based on truth (read “Defiance” by Alex Konanykhin) produces a truly amazing account in “The Hunted.” However, Brian Haig has written not only a best seller, one of the best books I have read all year, but a movie just waiting to happen. Like “A Civil Action,” this novel COMPELS the reader to commit to its every page. Absolutely terrific writing, characters and plot.

AFTERWORD: This book horrifies us as it glorifies a man who would not allow the FBI, the KGB, the Department of Homeland Security, the INS and the mafia (both Russian and U.S.) to undo him. He and Elena were featured on “Sixty Minutes.” I HAD to read “Defiance” by Alex
Konanykhin (the real Alex) after this book and it is completely amazing. At 39, Konanykhin now heads KMGI, a thriving hitech B2B agency in NY. He was named “New York Businessman of the Year.” And last year, his beloved wife Elena, died.

Thank you to Hachette for providing this great book to review.
The Hunted is available for purchase from Amazon.com

Giveaway
Come back tomorrow, because you can enter this giveaway DAILY!

* This giveaway is open to US residents, 18 and over and ends on August 18, 2009 11:59 EST.
* The winner will be randomly chosen and contacted via email.
* The winner has 48 hours to respond to my email or an alternate winner will be chosen.
* Please make sure you check your junk mail folder
* Good Luck