You are here: Home / Fun / Books / Book Reviews and Giveaways: A Change in Altitude 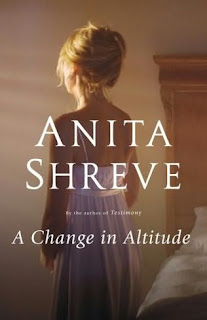 A Change in Altitude: A Novel

Anita Shreve creates breathtaking dives into marriage and relationships and comes up revealing depth of characters that take our breath away. Margaret and Patrick meet in Roxbury, MA. Margaret photographs for a Boston alternative weekly, and she is on a shoot photographing a physician assisting babies in the free medical clinic he has organized. She meets Patrick on her way to the cafeteria for a Tab. Patrick is completing a fellowship in equatorial medicine (tropical diseases).

He asks Margaret to go with him to Kenya, and they will be based at Nairobi Hospital. They marry in Cambridge. In Nairobi, they have temporary quarters with Arthur and Diana, both British, both complex and cool in demeanor and personality. Arthur decides that they will all climb Mount Kenya, a rigorous peak that requires 3 days, a guide and porters. In their innocence, or possibly because they are slightly intimidated by Arthur, Margaret and Patrick comply.

On the climb, Margaret and Patrick lose their innocence and trust in each other. Arthur hovers around Margaret. Sleeping on a bandu hut mattress on the 2nd day of the climb, Margaret feels something on her foot. It is a rat. Arthur, on the mattress next to her, grabs her hand. They awake, hands still clasped. Diana and Patrick are both horrified. What Margaret finds incidental, Diana finds enraging. On the glacier the next day, they are all clipped together with the guide pix-axing step holds in the frozen ice. Diana suddenly unclips herself from the others and starts up the glacier on her own. She loses hold and plunges into the crevasse in the mountain. Arthur screams and almost takes everyone with him as he leans off the glacier. The guide finally leads them all to safety.

Everyone, including Patrick, blames Margaret. The next morning Margaret and Patrick talk, and Patrick tells Margaret that her flirting with Arthur caused the event. Margaret intuits her own complicity and stares bleakly at Patrick. In this scene we realize Patrick’s balance sheet – his mind moves over and through his emotions, stuck in reason with no compassion. Margaret, his direct opposite, remains deeply emotional and intuitive, perceptive and engaged. While Patrick’s only emotion is anger, Margaret finds herself confused and muddled.

They move closer to the hospital and Patrick falls into his work leaving Margaret to fend for herself. Margaret signs on with the Kenya Tribune as a photographer. As the ice between them cracks the marriage, Margaret finds herself drawn to a kind and caring African-Irish reporter, Rafiq Hameed. Rafiq stops the romance and Margaret realizes that she loves him. She then immediately miscarriages Patrick’s child, and falls into despair. Then, her newspaper editor, Solomon Obok is jailed for treason when he exposes the murder of 50 university students. Rafiq, the co-writer on the story, is deported to London. Margaret rushes to the airport, and sees Rafiq boarding the plane. He mouths, “save Solomon.” Margaret writes letters to all the embassies, but knows she will never see either man again.

Part of Shreve’s genius is in the irony juxtaposed between these two characters. Patrick, the humanitarian doctor, is not humanitarian at all. All he cares about is his career. Margaret, on the other hand, helps several of the natives and along with Rajib, writes of their helplessness and takes pictures that portray their indenture to the ex-pats and the British who use them. She, along with Obok and Hameed, wanted to expose the murder of the students. Patrick feels that the natives are simply objects, and he has no interest in them other than keeping Margaret from losing his fellowship.

Trying to revive the relationship without putting effort into it, Patrick suggests the same climb up Mt.Kenya on the anniversary of Diana’s death. Margaret, knowing she has to say yes, complies. They engage another couple to accompany them but do not tell them of the background of their climb. The treacherous climb begins.

On the first trip, the peak veiled itself with fog. On this trip the fog disappears and Margaret sees clearly. Only Margaret makes it to the summit, and as she does, she lets go and realizes who she really is, and that she can survive – indeed, flourish – on her own. Finally, she sees the strength and beauty of both the summit, and herself.

With sparse, crisp dialogue, great emotional insight and compassion tempered with a beautiful portrayal of Kenya, Shreve brings us “Out of Africa.” I loved “The Pilot’s Wife” and this latest novel, once again, is a microcosm of the intricate quakes that enter relationships and destroy them. A great novel, encapsulated in the beauty that Africa nurtures and the political ugliness that Africa endures.

Rating is based on a 5-star scale

Thank you to the Hachette Book Group for providing the review copy as well as the copies to giveaway.

A Change in Altitude can be pre-orderd on Amazon.com

Giveaway
Come back and enter tomorrow as well (daily entry)

Come back tomorrow because you can enter DAILY!

We’re going to do something a little different this time –

Get 5 Extra Entries if you~

Plus do any one of the following

Be sure to leave a comment letting us know if you’ve done any of these.

Please make sure you leave your email address when adding a comment or I will not be able to contact you if you win (we’ve had that happen quite a few times – so don’t miss out)!

* This giveaway is open to US residents, 18 and over and ends on August 21, 2009 11:59 EST.
* The winner will be randomly chosen and contacted via email.
* The winner has 48 hours to respond to my email or an alternate winner will be chosen.
* Please make sure you check your junk mail folder
* Good Luck