You are here: Home / Ben / 4 Tips on Arguing Less with Your Partner

Arguing with your spouse is a natural part of any relationship, but there are ways that you can argue less and still get what you want. For example, did you know that it’s possible to be in an argument and come out feeling closer than before? Research shows that the key to reducing conflict lies in how you approach your problems. In this blog post, you’ll find four steps for arguing less with your spouse, even if they disagree! 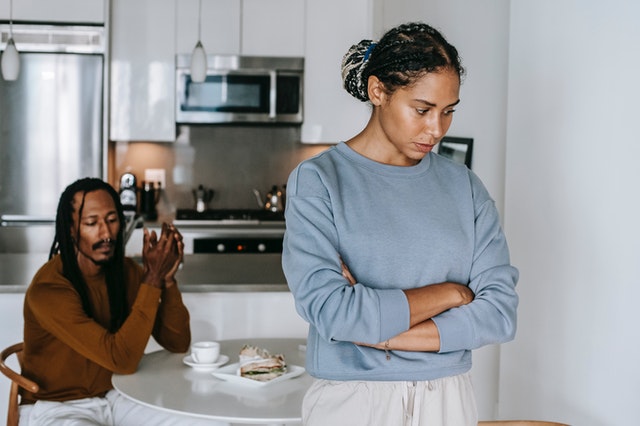 #1 Try seeing things from their side

The first step to less arguing is empathy. It becomes much harder to argue when you can see things from your spouse’s perspective. Try to understand their point of view, even if you don’t agree with it. This doesn’t mean that you have to give in or let them walk all over you-just try and get a better understanding of where they’re coming from.

In addition, empathy helps to reduce stress in the relationship. When you’re feeling stressed, it’s hard to think rationally and resolve conflicts. By taking a step back and trying to see things from your spouse’s perspective, you can help to ease that tension and make it easier to talk things out.

The blame game is a common argument tactic, but it’s extremely unhelpful. It usually goes something like, “it’s your fault that this happened!” which only shuts the other person down and makes them feel defensive. When you’re arguing with someone, avoid saying things like “you never” or even just pointing out what they did wrong-instead focus on how you can both solve the problem together.

By playing the victim instead of taking responsibility for yourself, the odds are against you, effectively resolving any conflict. Instead, you’ll probably end up feeling more resentful towards each other than ever!

Compromise is key in any relationship. If you can’t both meet in the middle, then nothing will ever be resolved. This doesn’t mean that you have to give up everything you want or let your spouse do whatever they please either! It just means finding a way to cooperate and work together. When it comes to arguments, try and come up with a solution that works for both of you. If one person always has to give in, resentment will build over time.

By compromising, you’re showing that you respect your spouse enough to at least try and find a solution that works for both of you. And, if all else fails, consider seeking professional help. A therapist can provide guidance on how to argue less with your spouse; there’s no shame in asking for help! They will also be able to refer you to a reputable spousal support lawyer should you and your partner choose to go your separate ways.

#4 Don’t bring up past transgressions

It’s human nature to want to bring up past wrongs during an argument. After all, it feels good to make the other person feel bad, right? Wrong. Not only is this a really unproductive way to argue, but it also dredges up negative feelings that will only damage your relationship further. Furthermore, if you’re caught up in the past, you’re not going to be able to resolve the conflict at hand. So leave the past where it belongs in the past!

If you can follow these four steps when arguing with your spouse, you’ll be on your way to less heated debates and a more peaceful relationship. Remember: compromise, empathy, and leaving the past in the past is key! Good luck!