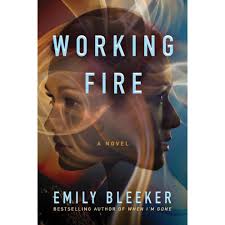 Fire Chief Brown and his daughters Amelia Brown and Ellie Brown live in Broadlands, Illinois, a small sleepy town where Dad is the fire chief.  Now, Chief Brown has had a stroke.  Ellie has left medical school to return home to help her sister and her dad.

Now Ellie works as a paramedic to assist Amelia with her disabled father.  Amelia is married to Steve, who runs a roofing business.  Steve, an ex-firefighter who worked under her father, is Amelia’s hero and Ellie loves him like a big brother.  Amelia, a cellist, has two small children and as she is a part time caretaker for her father, it falls upon Steve to make ends meet.  And Amelia has no idea how Steve resents that.

Then there are Collin and Caleb, Collin’s brother.  Collin, a med student, and Ellie are engaged.  Caleb, who has always been in love with Ellie, works for Steve.  Caleb and Amelia were high school sweethearts, until Caleb broke it off abruptly.  Caleb is a gifted artist but since working as Steve’s gopher, Caleb and Amelia are formal – Caleb works for the boss and Amelia is his wife. They barely talk.

Travis is a police officer who knows Ellie as the pretty girl he sees at the hospital as a paramedic bringing in patients.

Until.  One day, Ellie and Chet, her partner get a call to a shooting and a murder and the address is Amelia’s house. As Ellie rushes into the house before the police even arrive, with Chet at her side, she can only think of Amelia.  And when she sees what is in front of her – her sister is covered in blood and Steve and another man lie dead at her feet, Ellie knows life will never be the same.

As Bleeker pulsates from present to past, Working Fire casts its maelstrom plot into the engorged flames, and we watch.  Smoke rising, suspended in suspense, the plot carries the characters into the cauldron that melts their lives, revealing skeletons in the ashes that Ellie and Amelia barely survive.

As Caleb is soon determined to be the chief suspect, Ellie’s heart senses something is not right and Bleeker twists again into the strong winds of Working Fire.

« Yes to ME!
Moving To Torrance? 5 Things To Do Beforehand »