You are here: Home / Fun / Books / Review: The Woman from Prague 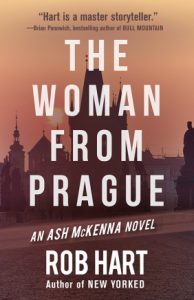 The Woman from Prague

Samantha, the woman from Prague is brash, dangerous, miasmic and a clean mean fighting machine.  Personally, I would have made her a little more weird, like Lisbeth Salander, the protagonist in The Girl with the Dragon Tattoo, but I’m not the author.  Rob Hart pops us with a plot that shakes its booty – and then some.

Ash McKenna, a sort of private investigator, has fled to Prague from the U.S., and his visa expires soon.  As he ponders his next travelogue, a strange man named Roman approaches him, stating that he is a U.S. government official who knows Ash’s every move and his many secrets.  Roman demands that Ash must intercept a package on the Charles Bridge as it is being handed to another operative.  And Roman shows Ash a picture of his mother’s house and threatens to have her killed if Ash does not comply.  When Ash gets to the bridge, he discovers that the situation is not a hand off – it is a hit.  He sees the woman operative and saves her although he is almost killed by the assassin.  As Ash tries to figure out the woman, Samantha, that he has saved, he realizes that all is not what it appears to be.

International suspense, deadly operatives, and a twisted, bent and maze like plot create characters that are unforgettable as Ash, Roman and Samantha battle a deadly fight.

« Goin’ on a Bear Hunt….Camping and Cuddling in the Uintahs
A Day of Wine and Roses – with Cambria »