You are here: Home / Fun / Books / Book Review: The Children 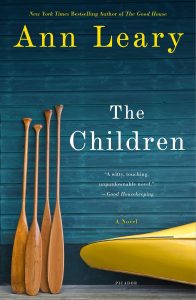 Leary (The Good House, 2013, etc.) writes about nutty, pedigreed New Englanders in this noirish comedy in which financial wrangling and emotional secrets are kept under wraps within a well-born Connecticut family until the arrival of an interloper from west of the Rockies.

Single, childless 29-year-old narrator Charlotte is a typical Leary character—likable but slightly bent. Charlotte makes a good living writing a fake mommy blog and swears she doesn’t have agoraphobia although she hasn’t left her home during the day since shortly after her beloved stepfather Whit’s death three years ago. Charlotte’s home is “Lakeside Cottage,” where she and her older sister, Sally, grew up with Whit and their mother, Joan. Wealthy, eccentric Whit had two great passions: Joan and the banjo. He and Joan didn’t believe in talking about, let alone spending, money. Although his two sons from his first marriage, Perry and Spin, have inherited the once-grand, now increasingly dilapidated family house, Whit requested that Joan be allowed to live there until her death. Enter Spin’s new girlfriend, soon to be fiancée, Laurel, from Idaho. Laurel’s resume—Olympic-level skier, MFA from USC, huge advance for her first novel, a relative of Ernest Hemingway—is as intimidating as her aggressively friendly manner. While Charlotte warms to Laurel’s questionable charm, Sally, who has moved home after losing her job as a violinist in Manhattan, remains suspicious. But Sally, who has a history of sneakiness, sexual misbehavior, and mental illness, may not be the best judge of character. And Charlotte may not be, either; she’s fascinated by Laurel’s knowledge of what she calls “life hacks”—actually scams, like ways to use a fancy hotel’s amenities without staying there—which are supposedly research for her novel. Leary is by turns affectionate and vicious toward her characters. So, is Laurel trustworthy? Was Whit? And what about Charlotte’s off-and-on lover, Everett, who lives rent free on the property as a kind of caretaker and is not above flirting with an attractive woman like Laurel?

In this deeply satisfying novel about how unknowable people can be, intrigue builds with glass shards of dark humor toward an ending that is far from comic.

Absolutely good, better, best, Ann Leary’s The Children create a conclave of dark and nuanced family intentions in this New England that convolutes the word siblings. Beautiful prose, a landscape that steals the scene and characters both human in their greed and dysfunction create a whirlwind of a novel about the Whitman family and what happens when the patriarch of the family dies.

Charlotte Maynard, the narrator of the story, is agoraphobic, 29 and single. As she tells the story of her family and Skip, her stepbrother and the family hero, we enter the morass of a family secret. Leary is brilliant in her control and prose and as the story unfolds, we are entranced with each member of the family, and Everett the caretaker of Lakeside Cottage and his relationship with Charlotte.

Totally wonderful, I am not giving in to revealing the plot – it is too good to reveal. One of the best reads of the summer, full of authentic and poignant reveals of a family that looks so good on the outside that we are enthralled with the secrets on the inside.

« Are beets the answer to my soda addiction?
7 Techniques For Keeping Your ‘Thought Life’ Healthy »