You are here: Home / Fun / Books / Ava sits back & reads: Without Fear or Favor 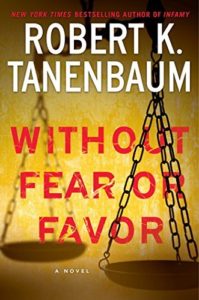 Looking for a crime novel to burn your boots off in the summer sizzle (it’s 105 degrees and climbing in Salt Lake City)?  With DA Butch Karp and his wife, Marlene combining to catch a killer who has already shot two cops, Without Fear or Favor sears across our reading landscape like a meteor about to crash and burn.  Fast, furious and killer deadly, this novel guns the gears and revs up the summer heat.

TV correspondent Pete Vansand has coupled with nasty Black rabble rouser Reverend Hussein Skip Mufti, a Baptist minister from Harlem who plays dirty politics to get across his statement of hate for cops and government.  Vansand treats Hussein to expensive dinners and wine on his station’s credit card to get a story from him.  The story at present is the alleged killing of a Black teenager, Ricky Watts, by an Asian NYPD cop, Bryce Kim.  Policeman Bryce Kim claims that he was surprised on a tenement stairwell as he and his partner were coming down by Ricky Watts who fired a shot at the policeman, who fired back.  However, when the teenager staggered outside and died, there was no gun to be found.  But Kim’s police partner and an old woman had definitely heard two shots, although there was no evidence found that the teenager had fired a gun.  Throw this into a mix of New York City murder – a police officer had been shot and killed by a Black group calling itself the Nat Turner Revolutionary Brigade just a week before – and race relations were on fire in the city between the Black community and NYPD policemen.  Hussein was a member of the New York City Council which is demanding that DOA Butch Karp put Police officer Bruce Kim on trial for the murder.  But Karp is not so sure that Hussein’s version is the truth.

As the situation fires up the city, others in the Black Justice Now group accuse Karp of a cover up with the NYPD brass.  And to make matters more embroiled, three NYPD cops have just been charged with the murder of Hussein Mufti’s rabble rousing colleague Imani Sefi and Hussein himself.  Vansand knows this is the big story he has been hunting down, and he will do anything to create mob violence to make it even better.

As Without Fear or Favor challenges Karp with his life when he is shot by a young Black activist, and Marlene has to help him get a witness into the trial, this novel serves as a projective into the maelstrom of NYPD against its own city.  Fantastic trial sequence, great plot and characters we love provide a summer read to beat the heat!

« ON A MISSION to Clean America One Polly at a time!
BODYARMOUR and ME The SOCCER MOM »