You are here: Home / Fun / Books / Book review: In the Darkroom

We received a copy of this book to review. All opinions are our own. 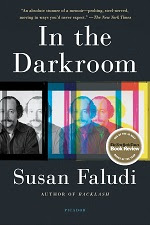 Susan Faludi is a Pulitzer Prize winning journalist, and it shows.  In the Darkroom is a kind of memoir, a kind of salutation of what identity means to our culture, and a mostly intrepid journey into the world of her father.  At seventy six, her father decides to have a sex change operation.  He has moved from Hungary to the United States and returned in his older age to Budapest.  He was a ferocious and isolated father, and he was Jewish, which he tried to hide.  He had a horrible time as a kid trying to stay alive in a Nazi regime as he was all alone on the streets.  And he has no or few emotions and refuses to tell Susan hardly anything about his past.  As she reconciles with him as a woman, she describes her personal journey with the stranger in Budapest in his seventies who dresses as she does.  She wants to know who her father is, what he is.  What is her father’s identity?  Because, in the end, that is part and parcel of her identity.

As a feminist writer, Susan is appalled, curious, angry and confused when her mean, violent, aggressive father who was a photographer, who constantly altered his image as well as the world’s images, when she discovers that she wants to contact her father after twenty years.  She wants to know him because his identity has changed many many times in her life as his daughter, and she wants to know why.  As she travels to Budapest, she demands that her father, now a woman, give up his family secrets, and offers her his life as a Jewish survivor of the Holocaust.  And her father gives up – some – of the information.  But not all.

As we follow Susan on her quest for the meaning of a national, personal and emotional identity, we follow her father, first called Istvan Friedman, then Stephen Faludi in the United States, and now called Steffi Faludi in Budapest.   Steffi sees herself first as a Hungarian and not as a man or a Jew.  She has once again transformed herself.

This amazing story, and amazing book, thrills, cajoles, incites, demands and offers everything a book should throw at a reader.  It is enticing and full of information as Faludi draws her daggers at her father and as they become as intimate as they have ever been over the course of his life as a woman in the country that denounced him as a child.   It is not just a story of the Holocaust it is a story of how we form our identities both cultural and familial.  I am in love with Susan Faludi as she presents In the Darkroom, a book full of the chiaroscuros of life and country.  One of the best reads of the year.