You are here: Home / They Watch / Patriot’s Day now out on blu-ray/DVD

This post contains sponsored material & affiliate links. All opinions are strictly our own. 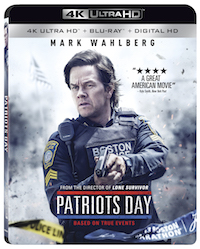 (A Story of Bravery in the Face of Adversity)

Patriot’s Day the movie reveals the drama, heroism and heartbreak behind the Boston Marathon bombers, and the Boston PD.  I went to grad school in Boston as I am from RI and consider Boston one of my homes.  When the event happened in 2013, I was like everyone else: shocked but used to the violence.  In Patriot’s Day, CBS films and Lionsgate capture the essence of what really happens in a way we cannot ignore: people, just like us, our neighbors, friends and family are the same ones that were killed and injured in an act of terrorism by two young men.

Variety says: Mark Wahlberg may star, but he’s not the hero of this ‘Boston strong’ homage to the actor’s hometown, based on the 2013 terrorist attack that shook the city.

The four day manhunt and the events that inject Police Sergeant Tommy Saunders into every scene during the manhunt might be a tad Jason Bourne to some, but a movie is a movie and the heroes that emerged in the —- Dun Meng (Jimmy O. Yang), a Chinese student recently immigrated who escaped the bombers and alerted 911; Sgt. Jeffrey Pugliese (J.K. Simmons), a police officer who wrestled down one of the bombers himself; Sean Collier (Jake Picking), the MIT campus police staff who died without releasing his gun to the bombers and the entire town of Boston and their police force are also heroes in this movie.  Wahlberg is not the main man although the film constructs its case through his structured appearances in almost all of the scenes.  Some of the most dramatic scenes are the ones of the victims and survivors in the hospitals as they recover.

Amazing and brilliantly cinematically performed, Patriot’s Day is a wonderful collaboration of not only the events that occurred in 2013 but how a city, a police force, the FBI, the mayor of Boston and its citizens’ felled two bombers who would have gone on to kill many more.

As all of Boston, the FBI, and Sergeant Saunders discover leads and follow the hunt through to the young bombers, Muslim try to be jihadists, every scene is heartfelt with this production and action filled so that it is edge of the seat fantastic viewing.  At the ending, the scenes of some of the recovering victims, the survivors is heartfelt and perfect for a final scene.

5 Behind the Scene Featurettes