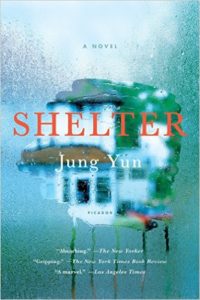 Stark and effluvial, dramatic and off-putting, Shelter demands a visceral response in its panorama of family violence and terror in the two generational Korean Cho family.  Jin Cho, the family patriarch, is ubiquitous in terrorizing his wife Mae and young son Kyung as he beats Mae consistently and Mae in turn beats her child, Kyung. Shelter opens with the already disintegrating and dismantled 36 year old Kyung, his American wife Gillian and his young 4 year old child, Ethan.

Kyung and Gillian are living on borrowed time; their credit cards maxed out, their lifestyles of living above their means even though Kyung has a good job as a professor.  Shelter begins with a metaphorical theme, the loss of the Cho family’s home, as they are meeting with a realtor to sell it or rent it.  The house with its reverse mortgage is not worth what they owe on it although it is in a good neighborhood.  Up the hill live Kyung’s parents, in the wealthiest part of town, and the thought of having to move in with them is something Kyung cannot manifest in his mind.  He has never asked them for anything, and he does the least of what a Korean son should do for them because his resentment at them sits large at hand every day. At 18, Kyung told his father he would kill him if he beat Mae one more time, and this resonates in the tension borne by both families.

Suddenly, as Kyung and Gillian are speaking to the realtor in their home, Kyung glances outside in the edges of the backyard which borders forest.  His mother stands, naked and bloody, at the edge of the precipice of Kyung’s yard, shaking and terrified.  Kyung immediately runs to her and says something to the effect that his father has started all over again after 30 years.  Mae leads him back to her own house, wherein the police have found Jin beaten and bloody, furniture upended and broken, and the housemaid Marina bleeding on the floor.  There has been a robbery and the ambulance bears Jin, Mae and Marina to the hospital.

Because he feels alienated both as a Korean, an unloved son, and a terrified husband and father, Kyung has no place where he feels he has shelter.  He feels like the alien Asian at the university where he teaches; the does not know how to show his wife and son affection because he has never experienced it.  He feels guilty because he cannot provide the life Gillian and Ethan need.  He is pedantic to his four year old child instead of nurturing or playful and he cannot seem to figure out how to redeem himself from the mess they are in financially although his father is wealthy.

Jin also finds no shelter within his relationship with his wife, not his wealth.  He is still Korean, still an immigrant, and although he stopped beating Mae 30 years ago, his way of existing with her is to allow her to buy house after expensive house and to decorate them with very expensive things via professional decorators.  Both he and Mae are hidden behind the carapace of a marriage, Jin holding in his rage, Mae pretending to be invisible.  And yet, when the elder Cho’s have to move in with Kyung, Gillian and Ethan because they have nowhere else to go to recuperate, Jin and four year old Ethan form a strong attachment.  Kyung feels intense jealousy that his father should steal his child’s affection from him, Gillian is distressed with the way Kyung hates his family, and Mae has turned into silence away from her husband, son and daughter in law.  On top of everything else, Gillian insists that they provide shelter for Marina, who, like Mae, has been brutally attacked and raped by the two intruders that ransacked them and their home.  Marina is a Bosnian immigrant and has nowhere to go; she cannot go home after being raped and the rape was so brutal she will need time to recover as well.

With both a psychological and dramatic protocol, Shelter thrusts forward as Jung Yun provides a plot that stands as interesting as the characters in this novel of generational rage and misunderstanding.  Not one sentence can be undone; each chapter drives the story and capitulates the reader into the depths of family drama, with each character seeking the shelter of love and acceptance.

The ending erupts and astounds, and Jung Yun’s debut novel distillates into one of the best novels of the year.  As we witness transcendence and a new meaning of the word shelter, we applaud an author who commands her characters with taut control. Not to be missed!