You are here: Home / Fun / Books / Book review of: The Outer Cape

We received a copy of this book for our review. All opinions are those of the reviewer. 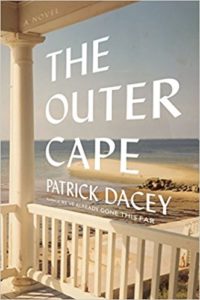 A novel comprised of one working class family and their two sons, The Outer Cape sets itself in the fictional town of Wequaquet, Massachusetts on Cape Cod.  Robert and Irene Kelly began their marriage with such hope and vibrancy: Irene is an up and coming artist, Robert a businessman with great potential.  When they become parents of Nathan and then Andrew, Irene embraces a stifling life of still lives and fruit: she is so busy being a mother that when she tries to paint or produce art, she flounders hopelessly, wondering if she had no talent or lost it within the confines of marriage and parenthood.

Robert first works for Mobil Oil until Irene cannot take the constant relocations now that they have small sons, so Robert follows his family business of building working class homes back to the Cape until he runs into the housing recession and frantic to provide for his family, he strings into an iffy and illegal real estate venture, the Indian Trees Lake scam.  He is jailed for fraud for three years, and Irene leaves him. He becomes a professional gambler for three months and fails at that also.  Irene stays on Wequaquet, with the boys.

Nathan has an athletic scholarship to Notre Dame, and in a stroke of bad luck, ends up ousted from college and into the army, where most of his friends are sent to Vietnam, Nathan goes to Stuttgart, Germany to a clerical service job. He stays in the Army and ends up in Kandahar, Afghanistan where he is in a patrol assigned to clear the routes so that the US patrols can travel between the Baghdad International Airport back to their operating base.  And then they are hit and Nathan struggles to save whom he can, looking at body parts of his friends where he cannot.

Andrew ends up a corporate VP and is the family hero, although Nathan is the medaled hero who has lost his way.  Andrew is the one Robert calls when he needs someone to pick him up when he is released from jail.  Andrew buys him a small cottage but treads softly on the ground around his depressed father.

When Irene is diagnosed with terminal cancer, Andrew calls Nathan whom he hasn’t seen in 10 years, and the family ascends on their hometown Wequaquet once more to stay with Irene as she dies.  Nathan stays for a short visit, as he is incapable of anything but wandering, and is killed in a fight without anyone in his family knowing about it.  Robert and Andrew do what they can.

The ending places Robert and Andrew in a joint hotel venture in their beloved Wequaquet, The Tidewater Hotel, where success finally seems to visit them.  Andrew marries Sara, moves to Block Island and returns with his own two young daughters, and with irony and nostalgia, Andrew realizes that while he has survived, he also carries the success of his family in his heart.

Lovely, painful, diligent, careless, Dacey creates characters that indulge in both a Flannery O’Connor oppression and a Raymond Carver simplicity of hope that summarizes the task of the American Dream and its dalliances with the lives of the working class Americans that subsume it.