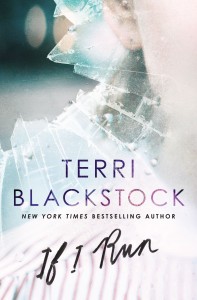 Casey Cox is bewildered.  She is covered in blood.  Her best friend, Brent Pace lies dead in her house.  Panic sets in and Casey decides to run.  She was twelve when her father died – a supposed suicide –  but Casey knows he was murdered.  She does not believe in God, the police or justice and with her DNA all over she knows she must escape on her own.

As a Christian writer, Terri Blackstock keeps it simply suspense with no hard core religious goals.  If I Run is a tremendous blink of sure crime fiction, and Blackstock writes it hard and true.  If I Run is a cliff hanger, and a well composed crime novel.

Dylan Roberts, former military investigator, is hired by Brent’s family to find the killer. As Brent follows Casey’s escape route, he doesn’t believe she could be the killer.  Before she left, Casey wrote her landlord a check for the rent.  Everyone who knows her claims that she is kind and sensitive.  She does not sound like any kind of killer and Roberts begins to wonder if he is being influenced by his PTSD.

On another bus heading to Atlanta, Casey makes a friend, Miss Lucy, a woman who admits to killing her husband because he was trying to kill her.  The elderly woman tells Casey about the small town in Georgia where she lives, Shady Grove.  She invites Casey to come and check it out.  So instead of Atlanta, Georgia, Casey decides to stop in Shady Grove, as good a place as any to hide. She visits Miss Lucy and discovers that Miss Lucy has a granddaughter who has been missing for two years.  It is beyond Casey’s ability to stay out of the mystery, and she decides to help Miss Lucy and find the missing girl.  And as Casey discovers secrets that Shady Grove does not want to reveal, Dylan gets closer and closer.

As the action tamps up and Dylan uncovers more and more good about Casey Cox, he begins to realize that he believes her innocent.  But he is being paid to find her, and he follows the clues to Shady Grove.  As he discovers her email addy, NotGoingDown, he attempts to email Casey to talk to her.  And what he discovers can be found in the surprise ending.

A well done thriller, Blackstock maintains humanity throughout her novel while still pounding the reader with clues and crime.  As Casey and Dylan go back and forth in separate chapters, we discover the truth.

I liked this book, and would love to read more in the series as it is written.

« I’m getting better every day with Nature Made Vitamins and Walmart
Book review: Anatomy of Addiction »