You are here: Home / Fun / Books / Book review: The Newsmakers 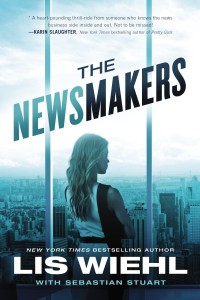 Reporter Erica Sparks has just been recruited by Global News Network in New York City. Global News Network is only one year old, well capitalized and the newest and greatest news producers in town.  Only Nylan Hastings, GNN’s head, knows GNN is floundering financially and needs a new voice, a person who commands his news. And so begins his campaign with Erica.

Newly divorced, Erica cannot turn down this amazing opportunity and decides to leave her 8 year old daughter Jenny with her newly divorced ex-husband in order to pursue the job of a lifetime.  On her first day she meets Greg Underwood, her producer and mentor and sparks fly.  Although she wants no romance, there is a definite thrust with Greg.

As she enters her new world at GNN, on her first day Erica decides to pursue a story on the Duchess of Cambridge who is visiting the city.  She finagles the interview with the Duchess and when she enters Battery Park in Manhattan to interview the Duchess, she watches as the Staten Island ferry appears at full speed off course and toward the seawall instead of its docking berth.  Erica demands that her photographer get the footage and he does as the impact fills his screen with bodies flailing both off the boat and on land.  She starts to broadcast the disaster in front of her as screams fill the air.

When she arrives back in her office, Erica knows she is on her way at GNN.  As she sits at her desk she is informed that she has an interview offer with The View and Erica is in seventh heaven as a rising new star.  And then another reporter, Claire Wilcox, steals her footage of the ferry crash.

Two weeks later another opportunity falls into Erica’s lap when she garners an interview with Kay Barrister a former famous actress turned politician and a candidate for the next presidency.  And as Erica starts to roll her cameras, Kay falls dead into Erica’s arms as Erica tries to revive her with CPR.  And Erica’s ratings soar.

So what is the deal?  As Erica ponders what is happening in her life she cannot help but wonder how her luck is so heavily balanced – what is really going on?

As Lis Wiehl throws Erica into a secretive plot that involves mayhem and murder, we find ourselves as troubled as Erica – whom is manipulating whom and why are stories falling all around Erica with no effort on her part?

The Newsmakers proves a thrilling and fantastical read as Erica begins to realize what is happening.  Is the news being manipulated and why has she been chosen to play out the part of star reporter?

Fast and furious, the Newsmakers pounds at Erica’s heart and produces a great read with a plot that encounters more twists than Oliver!  When Erica discovers Kay Barrish’s murderer, a gang member named Miguel Fuentes, The Newsmakers goes viral.

Clever and full of romance, criminal intent and great characters and plot, The Newsmakers will hit your Murder Novel spot for the year!  Great read.

« Book reviews: Where My Heart Used to Beat
CLEM the Dachshund finds a Natural Balance »