You are here: Home / They Watch / DVD review: ZARAFA 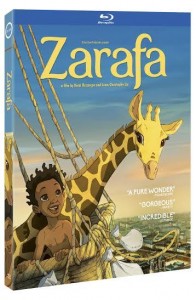 A wonderful film for both children and adults, the plot of the film has a grandfather telling his grandkids the story of Maki, a young boy who escapes from slave traders, befriends a giraffe (the title character), cross the desert, meet a pirate, and a few other things on a trip that takes him from Africa to Paris

Just in time for the holidays, and inspired by the true story of the first giraffe to visit France, this animated film was nominated for the Cesar Award for Best Animated Film and the DVD includes the original French audio track.  Available in Blue Ray and DVD, the animation is a delight.

A grandfather sits with his grandchildren and decides to tell them a tale – the story of a little boy named Maki, who is enslaved by mean slave traders.  In the night, Maki frees himself from his shackles and follows the desert as he is pursued by the slavers.  Maki meets an orphan giraffe named Zarafa on the savannah as he flees, and he also meets a nomad, named Hassan, and also called Prince off the Desert.  They journey to Egypt in Alexandria and meet the Pasha of Egypt. The Pasha wants to give King Charles of France a present and orders Maki to give up Zarafa as the gift.  Off Maki, Zafara and Hassan go crossing the Mediterranean in a hot air balloon into Northern Africa and finally getting to Paris.  But …. What awaits them there?  You have to watch the movie to find out!

Full of cinematic animations, funny and poignant, artistic and melodic, Zarafa is a tale full of itself and full of us!  Wonderful to watch!  If you love Babar the elephant you will love Zafara the giraffe!

Overall: 3.7
Review by Broad A
We received a copy of this title for our review. All opinions are our own

is available for purchase on Amazon.com and at DVD & blu-ray retailers nationwide