You are here: Home / They Read / Book reviews: Passing Through 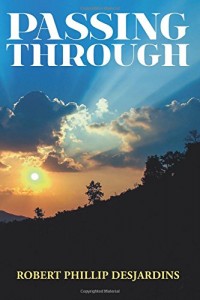 I first met Bob Desjardins, the author (he is also an influential California attorney) when I reviewed several of his previous novels ( A Darker Shade of Orange and  Land of the Saints).  When he sent me a synopsis of Passing Through a year ago, I got excited.  When I received it in the mail recently, finished and published, I felt anticipation.

The wait was well worth it.

The science of Cryonics, freezing humans with life threatening diseases, and then reviving them at a later time in the future when cures have been discovered for their diseased bodies, has been around a long time.  Passing Through delivers a moral, ethical and human drama, as its characters demand questions as they themselves are put into a frozen state: what dimension are these souls truly sent to, if their souls are present at all?

Surreal, yet passionately consorting with current scientific possibilities, Passing Through stuns as it drives the tale of the Douglas family, and Kevin Douglas, a man that Forbes states is one of the wealthiest men in the world.  Kevin Douglas is the patriarch of Douglas Industries, and Kevin has been awarded almost every commendation in the world.  Kevin’s right hand man, Bob Hackman, is present when Kevin passes out at a huge award ceremony and is rushed to New York City’s Mount Sinai Hospital.  It appears that Kevin has contracted a terminal incurable disease and has about 6 months to live.

Kevin’s older brother Donny Douglas has been dead for many years.  Donny established a large charitable foundation assisting Mexico and its citizens and left his wife Meryl in charge of the Douglas Foundation.  Their son, Matt, took over running the Foundation for the family but Kevin and Matt are having the same problems that Kevin and Donny had: Kevin wants to make more trillions of dollars, Matt in the name of Donny, wants to divert more of the family’s huge financial holdings into the Foundation for helping people.  Kevin is financial.  Matt is idealistic.  And Meryl supports her son Matt in the family dynamics.

Intelligent, well written prose and an ingenuous plot puts Passing Through on the top of the Fiction to be Read list at The Review Broads.  Not just a crime novel, but a complex reflection on theology, philosophy, scientific ethics and the more tangible dynamics of family and wealth, Passing Through touches every dictate of a good read, a novel to be reread the minute you finish the last page.

is available for purchase on Amazon.com and your local bookseller.

« Book review: The Girl from the Garden
On our radar: The Good Dinosaur »