You are here: Home / They Read / Book Review: Tenacity 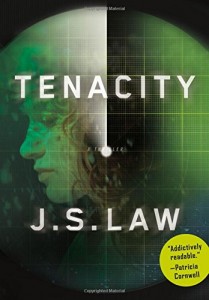 If you shuddered through Larrsson’s The Girl with the Dragon Tattoo, and fell in love with Lisbeth Salander, you will adore Tenacity’s protagonist, Danielle “Dan” Lewis, recently reassigned to the Special Investigation Branch’s Kill Team, the Royal Navy. Dan has just come off pulling a huge coup – finding and capturing a serial killer from her own Navy ranks. And she is one tough cookie.

While Tenacity is not the psychologically taut tight-wire act of The Girl with the Dragon Tattoo, J.S. Law can swagger with justified authorial pride, for Tenacity is a crime novel that soups up intelligent and strong characters tingling with authenticity. Throw in a Royal Navy that undulates and oscillates within the deep labyrinth of a nuclear submarine and Tenacity consorts with the best of the best crime novel to date. Want an all night read? This stunner reels with tension and plot.

Called in from the Royal Navy Kill Team to address a tragedy that has just occurred on submarine HMS Tenacity, Investigator Dan Lewis falls into the middle of mayhem and secrets aboard the sub, as the victim, a Navy seaman, Seaman Walker, has hung himself after his wife was found mutilated and murdered. And the suicide is on board the sub: the man has hung himself on his boat, the HMS Tenacity, within the bowls of the huge nuclear hunter-killer submarine as it lays in dock. Lewis knows if she finds the killer of the wife, she will find out what made Seaman Walker kill himself on board his docked and unmanned submarine.

Known as a loner, Miss Dan Lewis refuses the help of her partner, John Granger, out of an outraged pride and sense of friendship. She wants to prove to herself that she can do it alone. She has done this before, when her partner, Granger, was involved in her previous case – the Hamilton serial killer case. Lewis almost died when she caught Hamilton, a Navy officer, in hand with the bodies of some of the women he had killed. And the Internal Affairs of the Royal Navy are both indebted to Lewis for catching Hamilton and embarrassed by her lack of cooperation and insouciant attitude to the Navy’s strict rules and hierarchy, for Lewis abhors both. When Commander Roger Blackett, Lewis’ commanding officer and longtime friend, tells Dan and John Granger that they have both been requested as investigators on the suicide of Seaman Walker aboard the Tenacity and must partner up again, Granger is hostile. He knows that Dan Lewis is a lone wolf, and he doesn’t want to be pushed aside again by her. And yet he knows she good at what she does. Granger brings his conflict about trusting his investigator partner Lewis aboard with him as both he and Lewis board the Tenacity as it pulls out of dock – Lewis and Granger are stuck on the sub for at least a week with a possible murdering crewman or crewmen in order to interview the men on board. They will have no assistance from Commander Blackett or anyone else in the Crime Division.

On boarding the submarine, Lewis suddenly encounters a captain and crew who make their own rules – and who hate her. Rank no longer counts onboard the paranoid and dark world of the HMS Tenacity as it slips into the depths of the ocean. Lewis realizes she needs John Granger’s help, for everyone on board, especially the ship’s commander, undermine her both as a woman and a naval investigator. When she is attacked and almost killed by a seaman on board, Lewis realizes that she will not come out alive– the suicide of Walker on board the sub was manipulated by the killer, someone on the crew. And now that killer has Lewis in sight.

With the same determination and smarts as Lisbeth Salander, Dan Lewis thrusts herself into a plot that turns and twists, and provides a tempestuous and brutal labyrinth of a crime novel. Pure and simply, astoundingly good!

Exceptional in this reviewer’s notepad!

is available for purchase on Amazon.com and your local bookseller.

« On our radar: The Good Dinosaur
Ensaladas at Del Taco! »