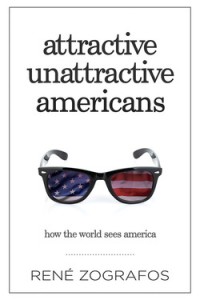 Rene Zografos is an award winning Norwegian-Greek author of eight books and he is a veteran journalist.  As Rene travels throughout the world, he seeks answers to how other people in other countries see “America” and “Americans.”  I haven’t read a book like this since “The Ugly American” published in 1958 and written by Eugene Burdick and William J. Lederer.

From Mexico-born ‘Dog Whisperer’ Cesar Millan and a Bangkok-based tailor named Marco, to American girl-obsessed Italian teenagers and Swedish ex-pats living in Los Angeles, Attractive Unattractive Americans is chock-full of hundreds of unexpected insights, opinions, compliments and criticisms about the so-called “greatest country on earth.” It’s a fascinating, not-to-be-missed exploration of culture, politics, philosophy, and the American Dream the likes of which has never before been seen in one place.

Attractive Unattractive Americans is not a book about policy or a specific act or event.  Instead, Mr. Zografos asks questions of people and celebrities, ex pats and normal people living all over the world.  The book “brings together the voices of thousands of people from around the world to highlight their opinions of Americans and the country they live in.  From Mexico-born Cesar Millan (the Dog Whisperer) and a Bangkok-based tailor named Marco, to American obsessed Italian teenagers and Swedish ex-pats living in the U.S., Attractive Unattractive Americans if full of unexpected insights and opinions about the country called the “greatest country on earth.”

This is a small book with a big message.  We Americans are looking at ourselves though the looking glass of a larger lens in Mr. Zografos’s lens, and we need to heed the information he presents.  Are we losing our integrity, power and ability to take care of ourselves as a country?  I myself believe that we are, and so do many outside of the U.S.  However, one of the most interesting world opinions is that American is too much in love with America.  We are not the first in the world anymore, states Zografos, and many people and countries simply have no interest in our arrogance and/or elegance.

Fascinating and alluring I enjoyed the honesty about the good, the bad and the ugly of a country that many people find fascinating as well as self-absorbed and dramatic.  A great read for without statistics or a political agenda.

Among the timely, unusual, and exceptionally entertaining questions Attractive Unattractive Americansaddresses include:

For more details about this title visit: ReneZografos.com