You are here: Home / They Read / Book review: Rooms 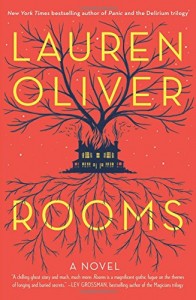 Intricate, triple webbed and seductive, Rooms by Lauren Oliver proves a must read. The characters are both human and ghosts, but Oliver presents both with somber and accurate emotional nuances that grab us and finger us into her tapestry of weaved secrets, sorrow and redemption. The novel is about family, and forgiveness, and until everyone in the novel forgives themselves, they perpetuate their deep grief and sadness.

Unusual, this is not your typical gothic ghost story thank goodness. Alice and Sandra exist in the country estate of the just dead Richard Walker. Richard’s estranged and dysfunctional family has come for the reading of the will and to deal with the exotic collections that he has accrued in a house full of secrets.

Caroline, Richard’s ex-wife, cannot stand the ambivalence of having both loved and hated Richard, and has become a ghost of a person. She lives in the swell and fall of vodka. Minna, Caroline and Richard’s daughter cannot stop having sex with anyone she can find at hand. Minna’s teenage brother Trenton, disturbed and suicidal, cannot access his feelings or existence after a near fatal car accident. And Minna’s daughter, 6 year old Amy, is caught inside their struggle.

As Trenton ponders how he will commit suicide, and stashes his grandmother’s valium, he begins to hear the voices in and out of the walls and the rooms. At first they are so faint that he cannot be sure he is not making them up, but as the days go by and they wait for Richard’s memorial service, he hears them more distinctly. And when a new voice, that of a child, joins the voices of crabby Alice and Sandra within the house, he begins to listen.

When the will is read, and Richard leaves one million dollars to a woman named Adrienne, Caroline must revisit the fact of Richard’s constant infidelity. And yet, as the days go by, events appear that demand that Caroline face reality without the stupor of alcohol, for she loved Richard dearly even though they were divorced.

Minnie must find the courage to deal with a perverted sexual encounter in her childhood and the fact that her father, Richard, did not protect her, although she has never spoken the truth to anyone.

Trenton, who is also lost, meets another teenager, Katie, and starts to wonder if someone can actually like him as he is. He also encounters the stories that allow him to realize his compassion and empathy and that show him he does not have to take his own life.

Amy remains Amy, a child with an enraged and unhappy mother.

Sandra and Alice reveal the truths that have kept them entwined with the house and through little Eva, the child ghost, they allow the house and their truths to seal their redemption.

Oliver has made the house the main character in her story, and infused such creativity and bold characters into the foundation that this is one novel that trembles and swirls with both human and emotional timbre that you simply cannot put it down. A great read.

is available on Amazon.com as well as booksellers nationwide.