You are here: Home / Fun / Books / Book reviews: The Miniaturist 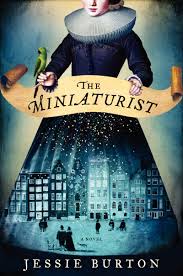 The Miniaturist hums, thrums, vibrates and threatens in prose that proves tantamount to the art and creation of lives that parallels the theme of the novel. Like The Goldfinch, The Miniaturist explodes with such talent that turning the last page is like running away from home as a small child: you are compelled to return home and start over again.

It is 1686, in Amsterdam, a city where merchants flourish and Calvinism contains its citizens like a straight jacket. Petronella (Nella) Oortman, 18, has been married off to older, handsome Johannes Brandt, a fabulously successful merchant trader. The Oortman name is old and well known, although Nella’s father has squandered the family fortune through drink. The Oortman family feels that they have made a good match for Nella, as Johannes Brandt’s coffers are overflowing and his home in Amsterdam is flagrantly luxurious. When Nella arrives, her new husband does not appear, and she instead meets his strange and quixotic sister, Marin. The household consists of a Negro manservant, Otto, and an orphan girl, Cornelia, as well as Marin, and now Nella. Marin is not happy with her arrival, and the servants are self contained. Nella has no idea how to be a wife to a man who is never home and who appears aloof and unhappy within her presence.

Alone, scared, and repressed by Marin and Johannes’ symbiotic relationship, Nella tries to discover information about the family from Cornelia and Otto, called Toot by the family. Toot and Cornelia are outspoken and self involved, and Nella begins to wonder why there has been no consummation of her marriage, even though she has tried to approach Johannes, who rebuffs her. Toot is also a Negro, brought home from his travels by Brandt, and the city suffers in his appearance at the Brandts’ home.

As Burton relies on seventeenth century Amsterdam to reveal the mores and sanctions of the day, she creates her characters carefully and with every taut emotional nuance.

Nella’s only recourse is a gift from her husband: a cabinet that contains an exact duplicate of all the rooms in the house in exquisite and exacting detail. She finds an advertisement in the guild paper for a miniaturist, an artisan who can make tiny objects for her to fill her cabinet house. As each ordered object arrives, Nella begins to dwell on their perfection, for each object perfectly and beautifully displays the objects she requests exactly as the originals. When she receives an unordered set of the occupants of the house, a set of dolls with all the characters involved in the family’s life, she realizes that all is not right. She is angry: she has not ordered the dolls, and immediately ventures to the Miniaturist’s house with a letter asking him to stop sending objects, although Nella is ambivalent. Each figure is so exacting, so precise; she is overwhelmed with their beauty.

As Nella begins to discover the secrets hidden behind Johannes’ and Marin’s façade of a wealthy Amsterdam merchant family, she cowers with fear. And the Miniaturist continues to parallel each family event; in fact, the future is being told in the objects that the Miniaturist sends. When Nella decides to walk to her husband’s office by the docks, she stumbles upon the heinous family secret that becomes a horror that even the Miniaturist cannot stop. And then she discovers more.

Eerie, succulently written, with characters that are ripe with vulnerabilities and secret lives, The Miniaturist is an award winning novel waiting to happen. As the family and all of its members begin to self destruct, Nella displays strength and intelligence, while Amsterdam displays the ignorance and opportunistic nature of a city doomed by its own ways. The city itself is the representation of the characters in its lushness, power and greed. A three dimensional novel that teases and turns, ripples and throbs and is … simply superb.

The Miniaturist: A Novel