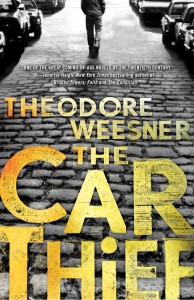 In 1972 Theodore Weesner published his novel The Car Thief to acclaim as a coming of age novel for his character, Alex Housman, the 16 year old protagonist. Like Raymond Carver, Weesner’s language, simple, stark, and powerful frames a story that deeply explores the lack of language that Alex has at hand to deal with a mother who took his brother and abandoned him and his alcoholic father. Housman’s dad wants to take care of his son, but caught up in alcoholism, he is a blue collar walking wounded.

Alex cannot envision his feelings of isolation and rage, or articulate them. He steals 14 cars, waiting to get caught, simultaneously cleaning out the wallets of his classmates in the school gym. Sent to a juvenile detention hall for a year, his life is harsh, primal and structured. When released, he founders, back in a high school that rejects him as a criminal and a father who forgets to come home.

As Alex struggles, he names his depression in acts, in the unsettling fear that never goes away, in the shame and guilt of a teenager who cannot bring anyone home to his hovel of an apartment. He struggles with having no friends, and no hope. Curly Housman, Alex’s father, loves his son and is trapped in the world he cannot hope to survive. Alex discovers his mother’s proclivity to bed strange men when he visits Howard, his beloved younger brother. And Alex sees how Howard drowns also in the company of his mother and stepfather Ward. There is nowhere safe for Alex.


This novel, like Catcher in the Rye or Lord of the Flies creates its atmosphere via language and character. As Alex persists, against all odds and through a labyrinth of horror and tapestry of emotions unnamed and silent, he gains the strength to look ahead. Much of the novel bases itself on Theodore Weesner’s own struggles and he and Alex merge as the novel progresses.


Classic, impeccably written, poignant, incredibly transcendent, The Car Thief stands alone in the 1959 struggle for existence of poverty level America and its families and the American Dream not only gone wrong, but non-existent.

Described as “one of the best coming of age novels of the Twentieth Century,” Theodore Weesner’s modern American classic,The Car Thief is poised for a new generation to discover.

Once talked about as an undiscovered American classic, The Car Thief is now re-launched—by upstart “Digital First” publisher Astor + Blue Editions—in a beautifully-designed electronic book format (to be followed by its print edition) in order to finally reachthe audience that the book and author so richly deserve. (ISBN: 978-1-938231-01-8, Ebook, April 24, 2012).

It’s 1959. Sixteen year-old Alex Housman has just stolen his fourteenth car and frankly doesn’t know why. His divorced, working class father grinds out the night shift at the local Chevy Plant in Detroit, kept afloat by the flask in his glove compartment and the open bottles in his Flint, Michigan home.

Abandoned and alone, father and son struggle to express a deep love for each other, even as Alex fills his day juggling cheap thrills and a crushing depression. He cruises and steals, running from, and to, the police, compelled by reasons he frustratingly can’t put into words. And then there’s Irene Shaeffer, the pretty girl in school whose admiration Alex needs like a drug in order to get by. Broke and fighting to survive, Alex and his father face the realities of estrangement, incarceration, and even violence as their lives hurtle toward the climactic episode that a New York Times reviewer called “one of the most profoundly powerful in American fiction.”

In this rich, beautifully crafted story, Weesner accomplishes a rare feat: He’s written a transcendent piece of literature in deceptively plain language, painting a gripping portrait of a father and a son, otherwise invisible among the mundane, everyday details of life in blue collar America. A true and enduring American classic.

The book is as extraordinary as the author himself.

is available for your Kindle on Amazon.com and booksellers nationwide

« Book reviews: The Miniaturist
Sneak peek: Into the Woods »