You are here: Home / Fun / Books / Book Reviews: A Possibility of Violence 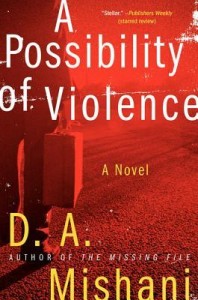 A Possibility of Violence

Pulsing with intelligence and enticement, A Possibility of Violence beckons and thrills.  Quietly psychological, humanely fascinating, Mishani’s plot and protagonist bend the rules and sustain our fascination with detective, locale and plot.  Clever and original, A Possibility of Violence provides a new voice in Tel Aviv’s Detective Avi Avraham, both tender and determined.  As the novel undulates from two different characters’ point of view, in and out of the ephemeral Tel Aviv, we, the reader, clench and pulse our way into the vast hearts and thoughts of a dynamic and exotic crime novel.

Detective Avraham Avraham has just returned early from a long vacation with his lover, Marianka, a policewoman.  A suitcase is placed next to a daycare facility in Tel Aviv and a bomb is suspected.  A 64 year old woman is the witness and describes a frail man with a limp leaving the suitcase and leaving.  When the bomb squad comes, the suitcase does not contain a bomb.  A few minutes later a policeman apprehended the suspected man and when the man was asked to identify himself, he takes off running.  Avraham is asked to interview the suspect, Amos Uzan.  Uzan says he was simply buying bread in the early morning hours.

Chaim Sara’s wife Jenny has just left him, and he cannot tell his two small sons.  They were at the daycare when it was evacuated due to a bomb scare and it is a day later and Shalom and Ezer are still scared.  Ezer has been having a hard time at the daycare; the woman who owns the daycare has been abusing him.  When Chaim complains brutally to the woman, she ignores him.  And then Jenny left.  As Mishani baits the hook, we all look away from the true criminal.

As Mishani weaves a tale of betrayal, paternal love and mistaken identity, the fragments and weaknesses of both Detective Avraham and Chaim Sara become entwined in a finely laid plot that explodes into a quivering ending.  We enter the lives and minds of both men, and the intricate turns and twists of Tel Aviv.  Superbly written, with mindful characters full of vulnerabilities and troubles, A Possibility of Violence is one of the novels of the year.

A Possibility of Violence: A Novel