You are here: Home / They Read / Book Reviews: Remember the Time 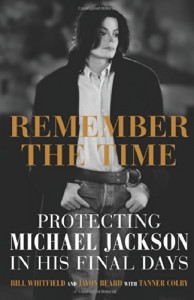 Remember The Time Protecting Michael Jackson in His Final Days

We all are curious about the strange and hard life of icon Michael Jackson, and his two bodyguards of his last days are honest and authentic as they describe the insane life that Jackson and his two children Paris and Prince lived as Jackson’s managers stole his fortune and left him out in the cold.

Well written and with detail and accuracy, the picture of Jackson emerges; his extreme phobias, his loneliness, his paranoia and his distrust as he continued to hire scam artists who stole his fortune from him. But it is not just the stealing managers: Jackson felt that he deserved to buy anything he wanted and he bought big. Very big. As Whitfield and Beard describe this generous, kind gentle man, they also detail his other side: the phobic and mentally disturbed side. Michael’s complexity and his horrible life as a child star seemed to push and pull him and paralyzed him in the end. He could not face an audience as he wanted only his privacy with his children.

When his financial situation and the lawsuits against him in the millions forced him to put on a final show in London, Michael could not cope.

Wonderfully written, with compassion as well as annoyance, Whitfield and Beard carefully describe the insanity of being the King of Pop’s bodyguards, parents and helpers in the last two and a half years of his life. Absolutely a must read for anyone who loves Michael Jackson~!

Remember the Time: Protecting Michael Jackson in His Final Days

« Book Reviews: All I Want is You
Book reviews: Brothers Forever »