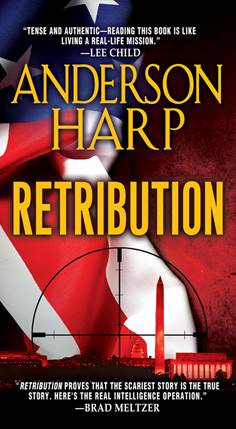 Fast, felonious, and frantic, Retribution combines military intelligence ops, Islamic fanaticism, terrorist tactics and the skill of one American operative, Will Parker, into a novel that descends into the Hell of the Pakistani mountains and treads on thin ice out the other side.  As Harp throws the on switch, Retribution stops us in our tracks.

In Riyadh, U.S. agent Maggie O’Donald works for Robert Trantham, married and Deputy Director of the CIA who works out of Langley and gives the orders.  He and Maggie are also having an affair.  When Maggie comes across an email from Islamic terrorists that threatens the safety of the world, she quickly encrypts a message into a picture of herself and sends it to Robert – just as the U.S. embassy where she sits gets a direct hit.  Maggie has lost both arms and is in a coma.

CIA Deputy Director Robert Trantham flies to the scene.  Maggie is transported back to Washington and Trantham sits by her bed all night, and realizes that he cannot be seen with Maggie.  It would ruin his marriage and his career.  The CIA calls in Will Parker, a retired operative who has the reputation of being the best.  When the call comes from the Agency, he is told that the mission is about Lockerbie and Parker immediately signs on – as long as he can have his old Korean team with him.

South of Pakistan, near the Afghanistan border, a man named Masood calls to another man named Yousef al-Qadi, the leader of the jihad who would change the history of Islam.  Masood gives Yousef a killer named Umarov as reinforcement in his task.  They have to find Maggie and make sure that the mission of destruction is completed.

Exhilarating, full of military detail and method, Harp uses his knowledge of the military to create combustion of a novel that carries a plot that will end the Western world and set up Islam as the only power in the world.  As Parker hunts and his men hunt and peck through the insane killing power of the enemy, they realize what the mission is about.  And they know if they fail Yousef will become the new leader of the entire world.

Retribution sparks, inflames and throws us into a maelstrom of political intrigue and military operations in a way that sets us on fire.  Betrayals, covert missions, and James Bond expertise create a novel not to be missed.

« Dyson DC65 Now Available at Best Buy – and I Got One!
View: 4 Weekend Boredom Busters »