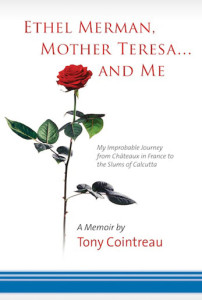 Quietly and deliberately, Tony Cointreau, singer and heir to the Cointreau liquor fortune, delivers us from his childhood to his three “mothers,” the women with whom he spent much of his life:  Lee Lehman, Ethel Merman and Mother Teresa in Calcutta.  As Tony tells his story, his struggles as a child are discussed but never take front and center although they crippled him for life.

With a distant mother and a gentleman father, Tony was raised by a nanny, Lucy, who allowed him to be raped by one of his teachers when he was 8 years old.  Tony could tell no one, and instead remained terrified for many years.  His family had been told several times to seek psychiatric help for the little boy who chased perfection in order to heal himself, but they did not seek assistance.  As Tony got older, his homosexuality in a time where being straight was demanded, created another crisis for him.  But Tony’s strength was in seeking out people who loved him and who helped him become the amazing man that he is today.

As a teenager, Tony’s family knew the Lehmans well, and Lee Lehman became another mother to him.  At the same time, Tony met Little Ethel, Ethel Merman’s daughter in acting class, and they dated for a while and then remained close friends.  When Little Ethel died young, Tony was there for Ethel Merman and remained one of her closest friends until she died.  Tony had always had a problem showing emotions, and death terrified him.  But his partner, Jim, helped him and Tony decided to overcome his fears by volunteering in Sister Teresa’s New York City Gift of Love, a home for patients with AIDS, in a time when AIDS terrified the public.

Between working in Paris, trying to survive his French grandmother and the Cointreau relatives, and working at Gift of Love in New York City, Tony finally arrives in poverty ridden Calcutta to meet Mother Teresa herself and to video her Missionaries of Charity nuns as they assisted the poorest of the poor in dying as well as the leper community that Sister Teresa founded.  Sister Teresa, Jim and Tony met many times while they were in Calcutta and they became good friends.  The horrors of Calcutta allowed Tony to finally determine his part in helping Mother Teresa and in healing his fears and terrors.

With insight into a life of rare wealth and fortune, as well as horror and terror, Tony presents a marvelous memoir filled with endearing and courageous moments. Tony Cointreau allows us into his heart as we place him into ours.

Ethel Merman, Mother Teresa…and Me: My Improbable Journey from Châteaux in France to the Slums of Calcutta