You are here: Home / Fun / DVD Reviews: The East 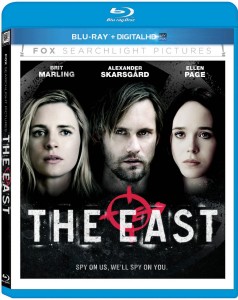 It’s funny where we get our film recommendations from.

I usually don’t listen to my friends, most of my friends tend to watch film for just straight up entertainment and don’t take into account the form and pacing and messaging of the film, they just kick their feet up and relax.  Unfortunately, I’m not afforded that luxury due to film school (except when I watch a Fast & Furious film for some reason).  Generally I go to a movie based on a variety of factors, however this film was first put on my radar when watching the writer/star of the film on Bill Maher.  I admire Bill Maher but would I like a movie that he likes?

Jane assigned to infiltrate an anarchist group known as The East for a private intelligence firm. She will be infiltration an eco-terrorist group that publicly attack the CEO’s of big corporations such as oil companies or pharmaceutical drug distributors that are aware of the harm they cause and try to cover it up. The East pays these people with the same coin, for instance if a drug has dangerous side effects and these CEO’s are paying people off to distribute them, they simply force the same drug on them. Once Jane infiltrates the group, under the covert name of Sarah, she befriends these eco-friendly anarchists who are led by Benji.

Within the first ten minutes of the movie I could have told you every beat of the film from then on.  I hate predictable films, so then I think to myself well at least there are a few actors that I like in here, maybe they will pull it off.  Holy shit over acting, over dramatic giving us too much to work with, I’m sorry but subtlety would be nice for a change.  This film confirms that Brit Marling is an awful actress and even worse writer (I know that this is an unpopular notion but I still have yet to care about one of her characters).  Every character in the film is so serious but she really takes the cake of frozen faced acting (no expressions what so ever just like Another Earth).

The Blu-Ray does have some pretty good quality.  The audio and video qualities are also amazing, and the special features have a bit that is worth watching.  Special Feature views are treated to some BS deleted scenes however the Behind the Scenes sections  are kind of impressive, most of all a section called Examining the Moral Gray.

I was not impressed just because the film was so predictable as well as the acting being rather stale.  The film really stats out engaging an interesting and then just becomes a tedious melodrama about a woman that cant act and two sides we don’t care enough about. I’m sorry I can with sound mind recommend this film.