You are here: Home / Fun / Books / Book Reviews: The Outcasts 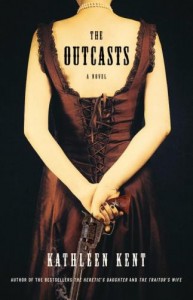 The Outcasts presents a stark, dark 1800s Western themed novel with two main characters: Lucinda Deerling, a prostitute, and Nate, a new Texas lawman in the early days of any law at all.  Lucinda, elegant, has epilepsy, and her father placed her in an insane asylum as a child and abandoned her.  Her fits are not known as an illness, which creates an aura of evil about her.  Lucinda is now at Mrs. Landry’s brothel, where she escapes after stealing Mrs. Landry’s hidden money, and Lucinda travels to Houston to start a new life.  For Lucinda is not only exotically beautiful; she is smart.

Nate Cannon has a wife and young daughter that he adores in Oklahoma.  He has signed up as a newly sworn in TexasState policemen to support his family.  Nate has a gift with horses, which aligns with his just and kind nature, and he can tame a horse with just a lead around its neck with endless patience.  He is given a commission by his boss, Captain Drake, to ride westward to find two rangers in the field, Captain George Deerling and Dr. Tom Goddard, and return them to Franklin, Texas.  The two rangers are on the trail of a serial murderer named William McGill who has shown up in Houston, and Captain Deerling has a personal vendetta against McGill: McGill has stolen his wife, Lucinda Deerling.  McGill kills for the fun of it; children, men, women, anyone he comes across in his robbery sprees.

When Nate finds Deerling and Dr. Tom, they have a prisoner, Maynard Collie.  And Nate is inducted into the Western law of George Deerling, as Deerling and Dr. Tom brutalize the prisoner and make him swallow a cyanide pill rather than waste their time taking him back to Franklin.  Nate is given a test by George Deerling to kill an Indian who is passing through by a stream and Nate refuses as he is half Indian himself, and cannot kill for any reason.  He finds himself a target of the wrath of George for George expects his every command to be followed, as George knows Nate will never survive if he is not as brutal as his prisoners.

As they follow the lead of McGill and Lucinda, who travel together, Deerling dies, Dr. Tom becomes a mentor for Nate and the plot remains magnificent as McGill eludes them again and again.

With a twist of an ending and writing that assuages the reality of the West in its early law days, Kent has assured us an intricate, serpent’s trail of a novel.

The Outcasts: A Novel