You are here: Home / Fun / DVD Reviews: The Big Picture 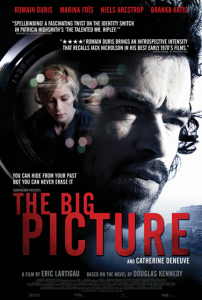 What a stupid title for a movie.

The title reminds me of a sh!t sandwich served up by Adam Sandler.  Thankfully it’s not.  What drew me to this film is the presence of Catherin Deneuve.  Yes, again with Catherin Deneuve, she’s one of the best living actresses so, I don’t care what you think, I’ll watch anything with her in it.  However she is not the star of this one (but still gorgeous).  So did I understand the big picture?  Lets see?

But first a synopsis.

Paul Exben is a success story – partner in one of Paris’s most exclusive law firms, big salary, big house, glamorous wife and two sons straight out of a Gap catalog. But when he finds out that Sarah, his wife, is cheating on him with Greg Kremer, a local photographer, a rush of blood provokes Paul into a fatal error. Standing over the corpse of his wife’s lover, Paul knows that his perfect life has gone for good. But by assuming the dead man’s identity and fleeing for an isolated part of former Yugoslavia on the beautiful Adriatic coast, Paul gets another shot at being himself and, at last, seeing the big picture.

Eric Lartigau’s film, ‘The Big Picture, begins as a thriller, but ends more as an existential meditation on life. Eric Lartigau, the writer and the director did a fabulous job in both of his departments. Although a little more character development of the supporting roles in the second half would have been beneficial.

Romain Duris comes up with a startling performance, his character transitions from one mode to another and the actor just goes freely along with it. His performance is another reason why the movie haunts you after it ends. I was moved by the intensity of his approach towards the character. This one role should transcend his career as an actor to higher level.

The movie nearly missed a perfect note because of two elements. First, it starts too fast, we barely know the characters, what they do, and what are the relationships between them when Kremer gets killed. A more developed introduction could have helped. The second thing is the way the movie ends. The film still feels incomplete by the end, and while that lets room for your imagination to fill, it would have been nice if they ended the movie in a more decisive way.

But the Blu-ray really contains no special features, which kinda sucks but the audio and visuals hold up.  But this film has really turned me on to Roman Duris as a great up and coming actor.