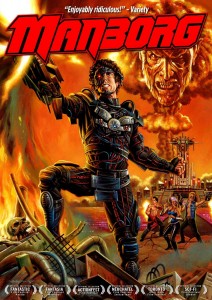 The aesthetic of stand-up cabinet games in dimly lit arcades with concentrated gamers shelling out quarters all day is alive and well. Do you miss the sensibilities of the late 1980s or early 1990s? Look no further. Are you too young to remember that and have no idea what that last question means? Don’t worry, you’re covered. Taking the equivalent of a classic fighting arcade game filled with button mashing and screaming along with your friends, MANBORG is definitely a cult level crowd pleaser that is shamelessly bizarre.
Let’s get to this review FOR SCIENCE!

In the future or an alternate timeline, hell has taken over the earth and Count Draculon rules over everything with his demon hordes. A young soldier killed in the war is reawakened and reborn in an even further future time with cybernetic enhancements. He is MANBORG. Desperate to learn the truth behind his creation he wanders the future-scape and comes across other humans straight out of a fighting video game who are forced to do battle in The Baron’s arena for the demon’s entertainment. A Kung-Fu Master, a loud mouthed Aussie Punk and his sister plan an escape and uprising in which Manborg must discover the hero he was meant to be and defeat the evil plaguing the land once and for all to save the Earth.

Sharing a lot of elements with old, side scrolling 2D fighter games, right down to the quality of the graphics and lots of stop motion animation layered in to create interesting low-budget monsters. There is a structure that resembles videogames, as it travels from story to boss fights. The human actors have that Mortal Kombat “photo-realistic” look compared to the rest of the backdrops. It has a very loose, awkward feel to it. Some actors are wearing masks that can barely movie that I’m sure was a pre-meditated decision to make it all the more silly. Intentionally awful line readings and split second “improve” diversions litter this thing and some of it will have you rolling your eyes, the rest will have you rolling on the floor from laughter.

MANBORG feels like the perfect movie you accidentally discover in a musty video store at the bottom of a used bin of old VHS tapes. You reach in just browsing and see the excellent cover art, your eyes lighting up with excitement. You immediately have to bring it home and pop it in the player to see how ridiculous it is. Then spend a few minutes tracking so you can kind of see what’s going on. After all that work you’re rewarded with a silly, midnight movie pre-made with years of watching abuse warping the image.

Writer, director, cameraman, editor, vfx and make up artist Steven Kostanski definitely is self-aware behind the choices he’s made for this movie. It’s as though he tore deep inside the 90’s mind of Full Moon/Empire’s Charles Band, blended it with some Albert Pyun and filtered it through a Sega system. In one of the features Kostanski says they were watching ELIMINATORS when the idea for this movie sprang to life, that makes a ton of sense. The film taps into that deep rooted, uncontrollable low budget aesthetic you get from the best VHS nonsense. From the way the FX looks, to the intentionally awkward delivery of lines and the great stylistic video game themed score that gets the tone exactly right.

Stay after the credits for the “Coming Soon from Astron-6” trailer to see the utterly amazing BIO-COP trailer. In a freak accident a police officer is plagued by a bio-chemical mutation that causes him immense pain as well as immortality. He desperately wishes for death while also trying to take down the latest designer drug. A short also directed by Kostanski is incredible, it’s a Troma film filled with buddy-cop movie tropes. With choice lines like the harrowing cry of “Why am I alive?!” and the random “Nothing gets you high, like drugz!” I loved it more than the feature itself, perfect.

Deleted and Alternate scenes, as well as the Bloopers feature show various alternate takes and messed up lines but none of the effects have been added in so it shows the actors interacting with nothing but a room draped in Green Screen making everything that much more ridiculous.

The Behind the Scenes shows a few minutes of the actors and director hanging out in their dimly lit basement studio set. They mess around, playfully insult one another, Ludwig Lee works out and practices some of his basic stunts. It’s nothing incredibly insightful but shows how little they were really working with. Kostanski wore a lot of hats on this one.
Stop Motion Montage and VFX Montage showcase the puppet creatures, small fx and how they layered the backdrops designed for the film and it’s all pretty cool set to music.

Also included is Kostanski’s Short Film called Fantasy Beyond. Done entirely in stop motion it’s a little goofy, no dialogue piece about a girl in an art gallery and monster hunting rock n rollers doing battle against creatures hidden in the artwork. There’s a lot of movement and detail, a lot of time went into it.

Interviews has each of the actors sitting down with a very unreliable host and keeping with the low budget of the feature they try to just fool around, not incredibly funny. I wound up skipping through them.

Premiere Q+A gives a much better idea of the director’s background, influences and inspiration behind the movie. His somewhat humorous explanations to certain questions make it abundantly clear he understands the movie is silly, he’s in on the joke and it has a ton of heart.

At a little over an hour it’s an incredibly short feature film and it never overstays its welcome.

You’re in and then out as almost as quickly as it started because it spends so little time on narrative and just keeps pushing forward with momentum, throwing more weird stuff at the audience. It’s a fun diversion that knows when it’s time to end the joke. I’d recommend it for BIO-COP alone but MANBORG is the perfect kind of cheesefest that benefits from a late night screening with a couple good friends and A LOT of beer.