You are here: Home / Fun / Books / Book Reviews: The Diabolist 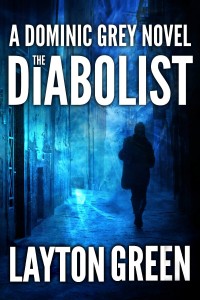 Mr. Green’s The Summoner proved his great talent. The Diabolist ensures his place at the top of historical crime fiction: his number 1 place. The Diabolist, like The Da Vinci Code, is not to be compared: both Dan Brown and Layton Green show individual and certain genius.

Viktor Radek is a professional private investigator of cults and cult atrocities. Dominic Grey, his partner, has an ex-military background and specializes in the martial arts. Both men have their doubts as to whether God/Good/Evil is one and the same – or something different. When a Satanic priest in San Francisco is murdered by an ethereal robed figure and spontaneous combustion Interpol calls Radek to the scene. And Radek calls Grey in to assist him. In Paris, another cult leader is murdered. Radek discovers that a new leader of the Church of One Enlightenment is involved, Simon Azar. Only Radek knew Azar as Darius, his best friend in college. They were part of a threesome, including a girl they both loved, who dabbles in the occult for informational purposes. Only Darius has made the occult into reality.

As Radek and Grey risk their lives and enter a world they were not sure existed, they discover the grimoire, a document that allows its reader to become invisible and become Satan Himself. Radek and Grey follow the tracks of the secret document known only to the Vatican through Paris, London, York, Sicily and into a monastery known to no one. As they fight both the past and the present, Green mesmerizes with a cast of characters both stunning and evil.

The Diabolist (The Dominic Grey Series)