You are here: Home / They Read / Book Reviews: Murder as a Fine Art 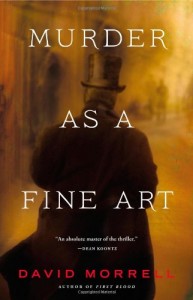 Murder as a Fine Art by

Murder as a Fine Art proves deliciously adept in the ways of a fine crime novel.  It’s got the Three Big P’s:  Plot, Protagonist and Prose.

This historical thriller occurs in the 1800’s and begins with the true Ratcliffe Highway murders of 1811 in Victorian in London.  Based in part on the real author Thomas De Quicey, who penned “On Murder Considered as One of the Fine Arts”, and “Confessions of an English Opium-Eater”, Morrell follows the turns and twists of DeQuincy as he and his friends try to discover the identity of a psychopathic murderer who is following DeQuincey’s book, On Murder Considered One of the Fine Arts.

A quintessentially brilliant telling  of history combined with fiction, David Morell creates a novel so suspenseful and diabolic that history indeed seems like his fusion of fiction.  Watch out readers, for nightmares will follow you as you tread deeply into one of the best crime novels written in a long time.

In the steps of Anne Perry, Morrell’s Victorian England brazes itself upon its readers and combusts with writing that draws us so into his plot that Morrell has us eating out of his hands.  Wonderfully written, brilliantly plotted, Sherlock Holmes would be advised to shake David Morrell’s hand.

Don’t miss this one!

Murder as a Fine Art

is available on Amazon.com and booksellers nationwide.