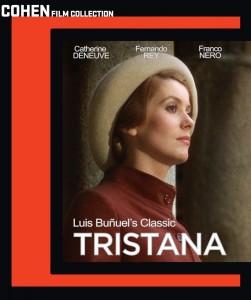 I can’t say I know Luis Bunuel’s style well (I’ve seen Un Chien), since I’ve not seen many of his works, and those that I’ve seen usually just struck me as blah. But then the other day I saw Tristana which starred Catherine Deneuve and was awe-struck by it.  This is by far one of the most interesting films I have seen in quite a while.

So what is Tristana (AKA Synopsis Time)

In the 30’s, in Spain, the teenager Tristana (Catherine Deneuve) becomes an orphan when her mother, who is the servant of Don Lope (Fernando Rey), dies. Don Lope is a decadent but respected aristocrat, anticlerical and liberal with socialist principles, and he becomes the guardian of Tristana. Don Lope sexually abuses of Tristana and develops a strange lover/father relationship with her.??When Tristana meets the painter Horacio (Franco Nero), they fall in love with each other and Tristana flees from Don Lope. However, years later, Horacio brings Tristana back to Don Lope with a terminal disease on her leg. She has a severed leg and survives, and Don Lope asks her hand in marriage. She accepts but now Tristana is a bitter and cynical woman and Don Lope feels the consequence of his acts in the past.

Tristana, played brilliantly by Catherine Denueve, is the central character that we see evolve from an innocent young girl with her many ideals about love and relationship, to a bitter and cynical woman at the film’s end who cannot believe in anything any longer.  Deneuve plays her amazingly. We witness, with heartbreak, every turn of her back on the things she love, and every rejection of all morality that she held before.

In spite of all its dramatic turns of events

Tristana is not an emotional and angsty film in its portrayal of its characters’ lives. Instead it is a soft and peaceful film that sympathetically accepts its characters’ flaws as much as it forgives them. It is a film that evokes the intricate feeling of looking back in our dark and troubled past and finding the exquisite moments of happiness amidst all the cynicism and grit.

The Blu-ray looks fantastic and I really enjoyed all aspects of the special features.  There are three really strong special features but the real treat here is the transfer, it looks glorious.

Film geeks and surrealist go wild, but in not sure how the rest of the movie going public will respond to this movie.  It says quite a bit and its very interesting but I could see that it would be boring for the normal Redboxer.

Overall:  4.5 Creepy Godfathers out of 5