You are here: Home / They Watch / DVD Reviews: Easy Money 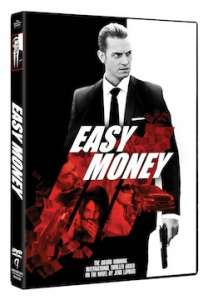 I first heard of this film when I heard the buzz from the TV show The Killing about two years ago.  I really dug Joel Kinnaman’s acting on the show so I decided to check the movie out.  I was not a fan of the director’s American feature, Safe House, but I was going to check this one out either way.  So, I searched and searched for this feature and could not find a copy, and then I was given a chance to review it, Yeeaaahhhh.  What would I think given all of the build up?

But fist a little plot summary:

Johan “JW” Westland is a student at the Stockholm School of Economics, who also works as a cab driver for Abdulkarim. When JW isn’t driving a cab or studying he’s, partying with the rich and powerful and goes out of his way to appear as one of them. Then Abdulkarim approaches JW with an opportunity to make some fast cash, he can’t resist.  He has to pick up a recently escaped prisoner that is being hunted by a rival gang.  He succeeds and is thrown into the middle of the criminal underground.

Let me say that this flick is very suspenseful.  The movie manages to bring forth some very sensitive moments as well as very brutal scenes with realistic violence. I really liked that the plot was not spoon-fed to the viewer, it is quite a demanding watch but well worth it.

Joel Kinnaman uses this film to breakout as an actor, he owns the movie.  He is stylish, chic and poor/rich seriously this man does everything greatly he plays both sides of his role great. Watching this after The Killing and cameo in Safe House makes me realize that this guy could be the next big thing.  The rest of the cast is quite good as well.

The film rotates between the three characters, but you can’t help but feel cheated due to the incompleteness of their back stories.  The script is a bit flawed but for me it still worked.  I did feel a little cheated and wanted more time with some more of the characters.  The direction of the film was kinda basic and nothing really stood out as a “cool shot” and the music really didn’t catch my ear at all.

Minus a few hiccups, Easy Money is engrossing and worthy of a look.

Just for Kinnaman’s acting at the very least.  I will probably watch its sequel in the near future – to compare.  And from what I hear Warner Brothers is developing an American version of the film starring Zac Efron (that may be good or bad).  But all and all I thought it was a worth while film.

is on shelves and Amazon.com now.

Overall: 4 car alarms out of 5

« Is Seth Rogan the worst person in the world?
Book Reviews: It’s Only Temporary: The Good News and the Bad News of Being Alive »