You are here: Home / Fun / Movie Reviews: Oz The Great and Powerful 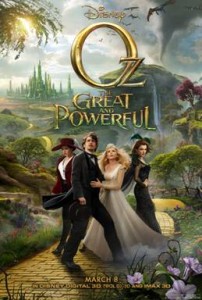 Oz The Great and Powerful

I should never doubt in Sam Raimi.

When I first heard the announcement that Raimi was directing a movie taking place from the point of view of Oz in THE WIZARD OF OZ universe I’ll be honest, I was apathetic. I enjoy the original ’39 movie, I enjoy syncing up Pink Floyd’s Dark Side of the Moon from time to time and zoning out on the imagery for a while, I haven’t seen Walter Murch’s RETURN TO OZ since I was a kid but with all of that nothing. I just couldn’t find any reason to get upset or interested in the idea of another OZ universe movie. Then I was worried, when I noticed the first trailer: A lush CGI world and a movie from the creative team behind that horrible mess ALICE IN WONDERLAND. What was Raimi doing?

A few minutes into watching the movie I realized he was having some old fashioned fun.

James Franco plays Oz, a travelling circus magician who uses slight of hand and deception to con some small town folk out of their few coins. He’s a conman who has thoughts of grandeur rattling around in his brain. It’s in the films sepia opening moments that we get a sense of who Oz is and what he really desires deep down. Sure he’s a chauvinist, philanderer, cheat and treats his assistant (played by live-action Zach Braff whose voice will return as a flying monkey) but he’s lonely. This is underlined when his old sweetheart (Michelle Williams) arrives to explain she’s gotten engaged to another man.

A series of mishaps leads Oz to a hot-balloon escape into a tornado. Next thing we know he’s in a heightened, colorful CGI landscape, OZ. The person Oz, our hero, gets mistaken for a prophesized Wizard that will fall from the sky and rid the land from the evil Wicked Witch. Along the way he meets Theodora (Mila Kunis) who instantly falls for the wizard and is led down a tragic path, Evanora (Rachel Weisz) a manipulative controller, and Glinda (Michelle Williams in a dual role) who if you’ve seen the ’39 film or read the books you know is the Good witch. The Wizard is sent about his quest and must make the people and himself believe that he is the one who can save them.

I broke down and went to this film in 3D and was sort of surprised how Raimi plays with it. The opening credits alone are worth those silly glasses on your head, they look incredible, and the style opens a curtain into the heightened world. He takes an almost old-school style, throws stuff out at the audience, roller coaster moments, he takes to it like a kid in a candy store. The original movie went from Sepia/Black and White into color and this movie takes that idea and jumps off from it. The opening scenes are in a sepia, small 1:33.1 boxy ratio, with the 3D popping out of the margins before we enter Oz and enter a lush, colorful widescreen. The CGI is mixed in with live-action and sometimes it tries to push it a little too far where it’s noticeable but it never looks different than say one of the scenic backdrops from the original. For every moment that pushes the CGI too far to the front there’s a moment like the Chinatown teacup house where Oz rebuilds a small girls legs where everything is seamlessly integrated.

The movie isn’t a slam-dunk and I still think Raimi could do better. OZ isn’t even in my 5 of his resume. The entire main cast is hamming it up for a bit of fun but I found James Franco to be extremely miscast. Sure he can play a bumbling oaf which is fun but for the suave and sleazy showmanship aspects of the character he fails miserably. I think it’s his squinty look, you can never really see into those eyes of his. The middle act of the film hits the breaks and becomes so sluggish and tiresome, I’ve heard multiple reports of sleep, right about when they get into the Dark Forest and doesn’t pick up the pace until very close until the end. I started checking out around this time but the final battle with the Wicked Witch that establishes Oz’s inventions is so energetic and fun that it doesn’t diminish the entertainment value, even if it came close to ruin.

So be warned there is a good chunk of the movie that may turn you away, I almost was but stuck it out and found myself surprised at the enjoyment I got from the movie. It’s exactly how you would imagine someone would go about THE WIZARD OF OZ if it were to be made today or at least fairly close. It’s almost there with some slight missteps along the way. Through all of it there is such a good sense of humor and camera work / action set pieces (The hot air balloon in the tornado is a standout) that just screams “Raimi.” The man is not afraid to show off his handiwork and once staple Bruce Campbell shows up randomly, you know he’s hit a groove to the finish line.

Oz The Great and Powerful  is currently in theaters

Our reviewer paid for his OWN admission to this film to facilitate this review. All opinions are our own.