You are here: Home / Fun / Books / Book Reviews: The Sunshine When She’s Gone 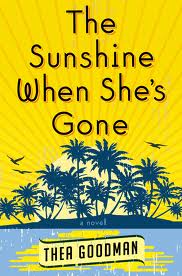 The Sunshine While She’s Gone

With poignant insight, a voice that announces she WILL be heard, Thea Goodman races our hearts into overdrive in The Sunshine While She’s Gone.

Goodman’s theme, salvation, trembles and echoes in her characters, John and Veronica Reed. Veronica has had a hard time bearing little Clara, now 6 months old. After a cesarean section, then a hysterectomy, Veronica is now so sleep deprived and hormonally exhausted, that she can barely get past her postpartum depression. John is trying valiantly to help, but finds himself exhausted, both mentally and physically. What happened to his wife? Veronica, the adventurous, and the fun girl he married? He is past angst: he can’t think straight.

One morning, John wakes up to walk Clara to the diner, so Veronica can get some sleep. It’s January, and freezing out, the diner is closed, and John keeps trying to find another place to eat. Finally, to keep himself and Clara from freezing to death, John flags a cab. His notion it only to let his wife sleep in. But when he gets in the cab, he tells the driver to go to the airport. He gets a flight to Barbados without much thought. He and Veronica have gone there often. He’s not thinking. 6 month old Clara can only drink goat milk and once he gets off the plane, everything seems to go wrong. John starts to realize that parenting can be elusive and dangerous, and exhiliarting at the same time. He becomes Veronica for three days, and Veronica becomes John.

Veronica sees John’s note that he has taken Clara for a walk when she wakes up after the first good rest she’s had since coming home from the hospital. She sighs with relief. She enjoys her day, and although she can’t get John on his cell phone, when a friend calls she decides to go out to dinner and enjoy her before baby life. After several days, she still can’t get hold of John. Where are he and Clara?

And what about Veronica’s ambivalence – she is joyous to be free of the baby and her unhappy husband and things start to go wrong. Then she misses them – and she’s already made a big mistake.

Although this may seem like a simple plot, it is not. Goodman’s prose presents a couple faced with a situation that threatens their very idea of who they are as they both exchange roles in the three day fiasco. Both John and Veronica find themselves out of character, thrust into situations where they are lost. As Goodman leads them back, John and Veronica are both different people, stronger and smarter than before. And they find compassion for each other as they finally view their situation through each other’s eyes.

With writing that swirls us into the same emotional chaos as John and Veronica, Goodman writes sentences, paragraphs and scenes that show brilliance and talent. This novel compels, and everything works. Goodman shows us a 30 something couple in the midst of crisis, stark emotional drama, and the abyss that a new baby brings as well as the joy. Perfect.

The Sunshine When She’s Gone: A Novel

is available at Amazon.com and other booksellers.

« #Starting Over with Brooke Shields
DVD Reviews: Lay the Favorite »